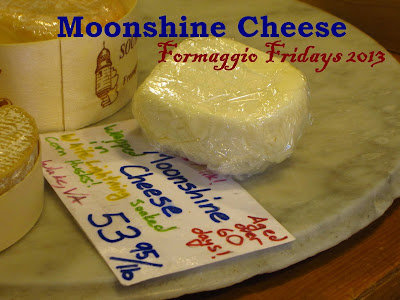 I noticed this a few weeks ago, but had other cheeses on my shopping list. Finally, after a few Twitter exchanges with fellow foodie, Twitter pal, and fromage lover Raul N., it was down to the wire and The Cheese Shop was almost sold out. We were warned that there was one round left. So I headed down there and - just in case he got there after I did - I made sure to leave a piece.

This cheese hails from the Middle Peninsula in Virginia, made by the Bonnyclabber Cheese Co. on the Sullivan's Pond Farm. Semi-soft, this cheese is wrapped in corn husks that have been macerated in White Lightnin moonshine and is aged for over two months.

Since I'd never had the cheese - or moonshine - I decided to do some reading. Interesting history!

'White Lightnin' is a brand name of moonshine which was historically called white lightning, mountain dew, hooch, or white whiskey. In the 1600s colonists used their excess corn to distill a clear corn whiskey. In 1920 Prohibition was passed, liquor was outlawed, and alcohol production moved underground. Produced in stillhouses in the remote hills of the South, corn whiskey was transported over backcountry roads by the light of the moon, earning it the name "moonshine."

While the history of the liquor fascinated me, I have say that the cheese did not. It was okay, but - in my estimation - not worth the ticket price. At over $50 a pound, I expected to be dazzled. I wasn't. Thankfully, I have 48 more weeks of my Formaggio Fridays project. I'm sure I'll discover some winners.