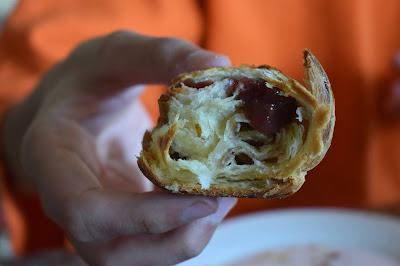 Bonne Année! This month the French Winophiles kick off their 2021 series with Jeff of Food Wine Click! at the helm. He has the group looking at what's new in Bordeaux; read his full invitation here. But the gist of it was this: "Let's look for something new going on in Bordeaux! Organic, biodynamic, natural wines? Cru Bourgeois? Outlying areas? You pick and share!"
If you are reading this early enough, feel free to join our live Twitter chat on Saturday, January 16th at 8am Pacific time. Follow the hashtag #Winophiles and be sure to add that to anything you tweet so we can see it. In the meantime, here are the posts the group has planned. These will all be live by early morning on Saturday the 16th.
In My Glass 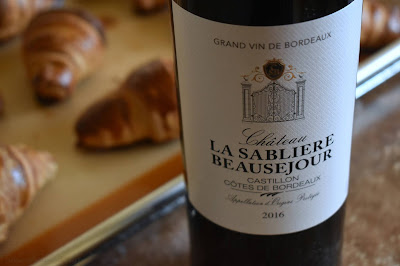 Je suis désolé! Well, I'm a little out in left field with this post as my wine isn't organic, biodynamic, or natural. Nor is it from an outlying area. So, hopefully Jeff won't be too much of a stickler for the theme. Also, I didn't pour the wine with the food I'm sharing. I'll get to that. But I did learn something about Château Beauséjour and the 'Grand Vin' designation, so I'm running with it anyway for this month's post.
When I ordered this bottle, I was swayed by the 'Grand Vin' on the label...only to discover that the designation is highly subjected and unregulated. It really is just a way for the château to indicate its best wine. Though, if they think it's their best showing, that might mean something subjectively. But it's definitely not a term that has set criteria to earn that label. Oh, well.
The Château Sabliere Beauséjour 2016 comes from the Castillon Côtes de Bordeaux AOC (appellation d'origine contrôlée). The vineyards in this area reside on a mixture of clay, limestone, and sandstone substrates and consistently produce high-quality red wines. I was stunned that this wine retailed at less than $15.
I was able to read that this is a 70% Merlot blend, but the composition of the remaining 30% is a mystery to me. Does anyone know?
In any case, the wine was bursting with red fruit and made me think of raspberries which I'll get to in a second. But this was a beautifully balanced wine with  mellow tannins and a good amount of spice.
On My Plate 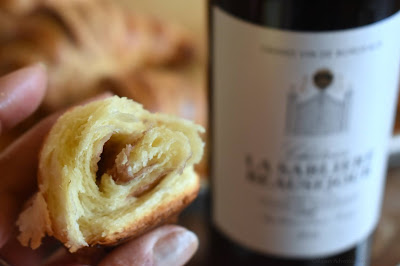 When I was researching foods from Bordeaux, I keep coming across beautiful pastries, including a family favorite: Cannelés. I had already shared those with this group last March when I posted Definitively Bordeaux: Cannelés + Crémant without the Champagne Price Tag. Jeff posted a little bit of trivia during the chat and I learned their history.  Do you know? If not, you'll definitely want to read about the 'Bunghole Pastries' and a Little Culinary History.
There were the intriguing Les Dunes Blanches, but after tasting the wine, I had my mind on raspberry pastries. So, I landed on homemade Croissants aux Framboises. They aren't only found in Bordeaux and I didn't even serve them with the wine since we had the croissants for breakfast. If you have never made your own croissants, you definitely should. They are well worth the effort. I promise.
Ingredients makes 10 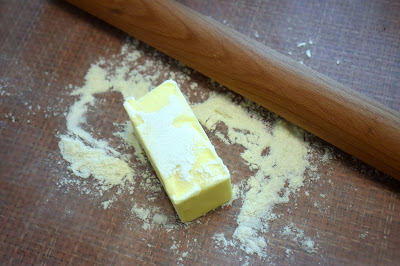 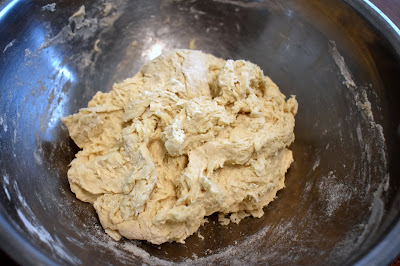 Combine the milk and yeast in a large mixing bowl. Let stand for 15 minutes for the yeast to bloom. Whisk in one egg. Add 2-1/2 cups of the flour, keeping 1/4 cup for later, and the salt. Stir with a wooden spoon until a shaggy dough forms. 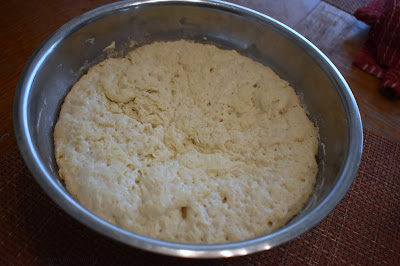 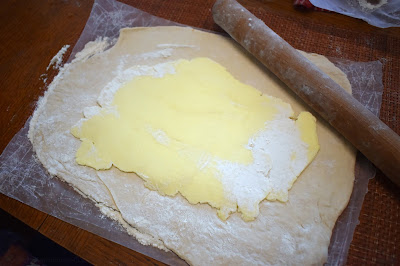 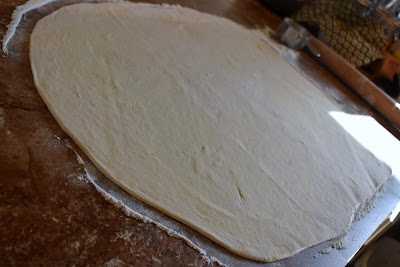 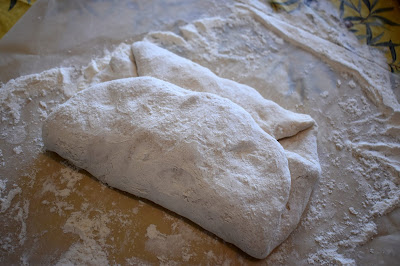 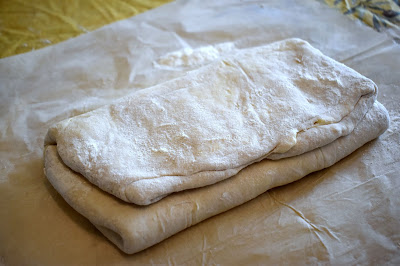 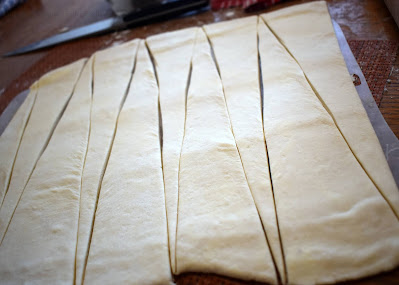 Remove the dough from the fridge and roll out to approximately 1/4" thick. Then cut a zigzag pattern to create ten thin triangles 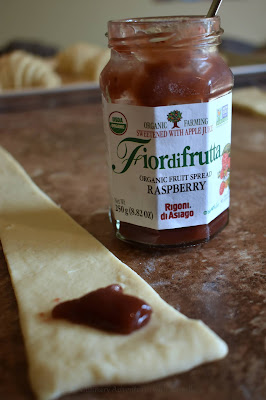 Smear a scant tablespoon of jam down the center of the triangle. 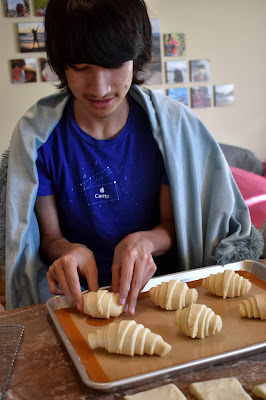 Starting at the base of the triangle, roll all the way up and place the croissants on a baking sheet. 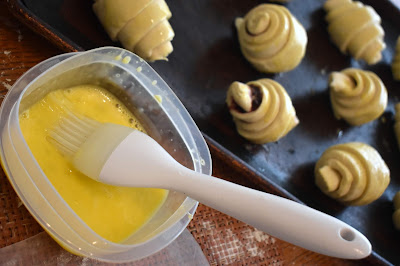 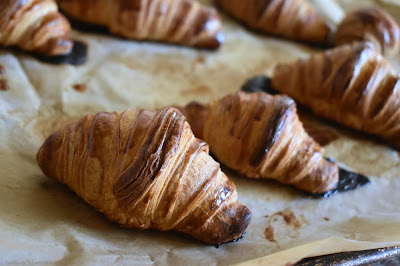 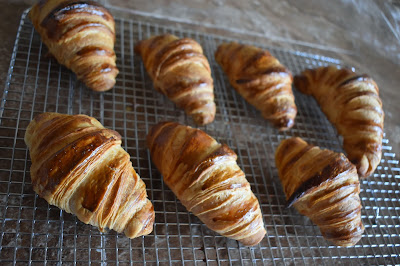 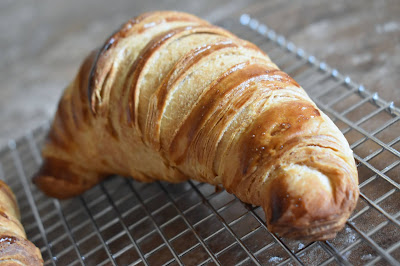 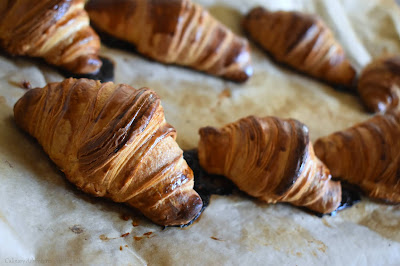 That's a wrap for the January 2021 edition of the French Winophiles. We'll be back next month with a focus on the red wines of Provence with Payal of Keep the Peas at the head. Stay tuned...