By Camilla M. Mann January 10, 2021
This is a sponsored post written by me on behalf of author Diane Chamberlain and publisher St. Martin's Press.
I received a complimentary book for the purpose of review, but all opinions are honest and they are my own.
No additional compensation for this post was provided; this page may contain affiliate links. 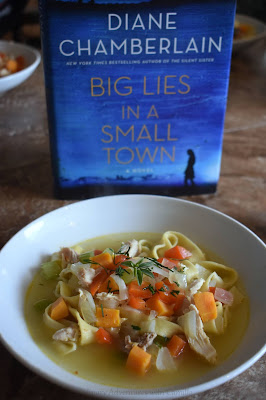 This week I am excited to be taking part in a virtual book release party for Big Lies in a Small Town by Diane Chamberlain* hosted by The Book Club Cookbook. You can see the party page! You may also search for the hashtag #BigLiesinaSmallTownParty on social media to find the posts. But to make it easy, I'm also linking to my fellow bloggers'; I will add their direct posts once everyone is live. Please take a look... 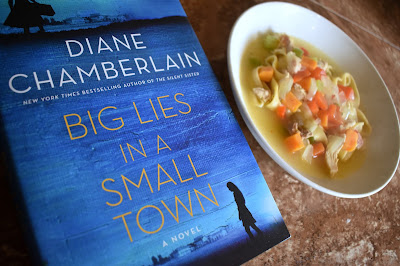 For some reason I had in my head that this was for our February book party. When I realized - on New Year's weekend - that it was for this month, and the middle of the month at that, I panicked. I needn't have worried. I picked this book up and read it in one afternoon and evening. I couldn't put it down.
Told in alternating timelines, this story is told from two points of view: Anna in 1939 and Morgan in 2018. Both land in Edenton, North Carolina because of art. Anna Dale, an unknown artist from New Jersey, was selected to create a mural to hang inside of Edenton's post office. Morgan Christopher, also an unknown artist and currently a resident of North Carolina Correctional Facility for Women, is sprung from her sentence to restore Anna's painting ahead of a gallery opening where the mural is set to be the cornerstone piece.
If you follow me at all, you'll know that I love history. So, it was a treat to learn that under President Franklin Delano Roosevelt's New Deal and Works Progress Administration (WPA) Federal Art Project, nearly a quarter of a million pieces were commissioned. The program was designed to put artists to work in paying jobs as well as bring art to public spaces such as schools, libraries, and post offices.
I really don't want to give many details because this story is a treat and Diane Chamberlain certainly knows how to tell a story. She judiciously doles out nuggets of information and pieces to the puzzle making the reader unable to think about anything except for picking the book up again and finishing it! My mind reeled with questions: What happened to Anna? Why are there inexplicable elements in her historical mural? Will Morgan meet her deadline? Why did Jesse Jameson Williams insist on Morgan to restore the painting? What was with the strict deadline of August 5th?!?! So. Many. Questions.
Often dual timelines are clunky to follow and it's challenging to care equally about both protagonists. That was not the case for Big Lies in a Small Town.  The only complaint I have is that the title doesn't seem to fit the book. In my mind, it's less of a lie and more of a secret. So, if I have piqued your interest, pick up a copy of the book. I think you'll be glad you did.
In the Bowl 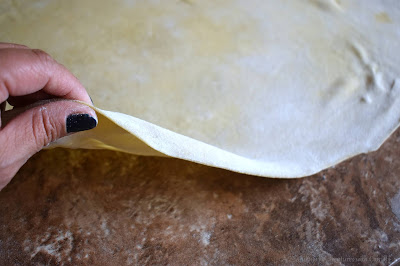 There was a surprising amount of food on these pages. I considered looking up a recipe for Yankee Pot Roast. Anna orders that at the Albemarle Restaurant when she's celebrating her mural sketch being approved (pg. 143). A full Southern meal was also fleeting thought because of this paragraph: "...so the three women set about cooking. They made a turkey, mashed potatoes, giblet gravy, and butter beans, which Anna had never heard of but which were the same as the lima beans she'd grown up with in New Jersey. Karl donned an apron and made some of the best biscuits Anna had ever tasted. She'd never known a man to willingly cook" (pp. 104-105).
Morgan's timeline was less inspiring, culinary-wise, for me. She had BLTs, pizza, a chef salad, and a burger at different points. So, it's no surprise that I landed on a mention from Anna's narrative for this post: Chicken Noodle Soup.
When Anna meets the town heavyweights - Postmaster Arndt, Mayor Sykes, newspaper editor Billy Calhoun, and cotton mill manager Toby Tiering - for lunch, all of the men ordered roast beef sandwiches. But "Anna asked for chicken soup. She couldn't imagine trying to speak at this important meeting with a mouthful of bread. The food was delivered quickly and the men dug in while she took a sip of her soup" (pg.44).
Though Anna's soup probably didn't include noodles, I wanted to make hand-rolled pasta because it always reminds me of a blank canvas. I thought that a fitting image for a recipe based on a novel about art.
Ingredients serves 6 to 8 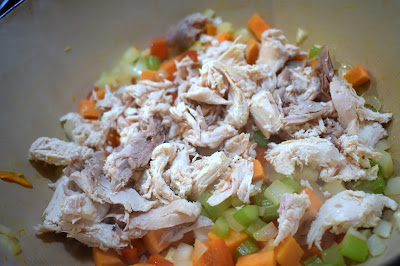 Pasta (makes two batches, so use what you need and save the rest for a different dish!)
Soup
Procedure 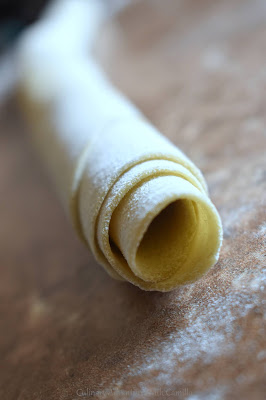 Pasta
Place all of the dry ingredients medium mixing bowl. Add the wet ingredients. Whisk until it comes together in a shaggy ball. Turn the dough onto a floured cutting board and knead until smooth and elastic, approximately 5 minutes. Wrap the dough in plastic and let rest for, at least, 30 minutes at room temperature.
Once the dough has rested, slice your dough ball into quarters. Cover the portions you aren't rolling. Turn the rested dough out onto a lightly dusted board and roll out as thinly as you can. I found that rolling it into a long rectangle make the most even strips. 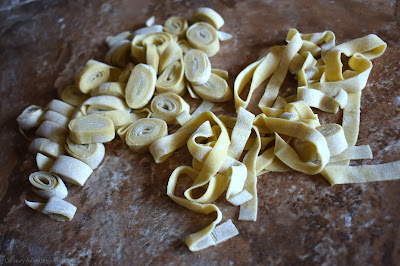 With a sharp knife, hand cut the roll into pieces whose width is the width you want for your pasta. I went with a wide fettuccine. Carefully unroll the strips and you're all ready. Set aside until you are ready to cook them. They will cook in about 3 minutes. 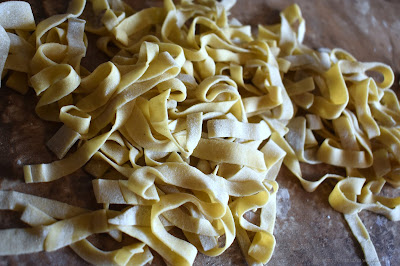 Soup
Heat olive oil in the bottom of a soup pot. Add in the onions, celery, carrots, and bell peppers. Stir to coat with oil and cook for 2 to 3 minutes. Stir in the chicken. Pour in the stock and bring to a boil. Reduce the heat to a simmer and cook until the carrots are easily pierced with a fork, approximately 10 minutes.
Return the liquid to a boil and drop in the noodles. and cook for 2 to 3 minutes. Season to taste with salt and pepper. Fold in the fresh herbs.
To serve, ladle soup into individual serving bowls. Garnish with fresh herbs and serve hot. 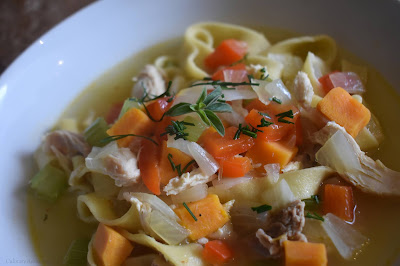 Many Thanks...
To the Publisher, St. Martin's Press, on Twitter
To the Author, Diane Chamberlain, on Facebook, on Instagram, on Twitter
To the Book Club Cookbook on Facebook, on Twitter, on Instagram, on Pinterest
*This blog currently has a partnership with Amazon.com in their affiliate program, which gives me a small percentage of sales if you buy a product through a link on my blog. It doesn't cost you anything more. If you are uncomfortable with this, feel free to go directly to Amazon.com and search for the item of your choice.
I have also added this to #FoodieReads.
Click to see what everyone else read in January 2021: here.