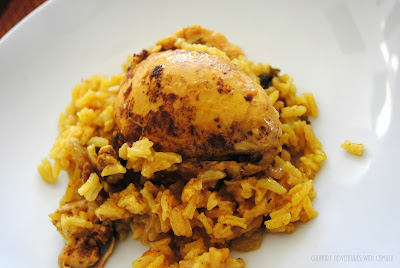 As we are recovering from the end-of-school mania, we are able to focus more on our Cooking Around the World Adventure. I haven't finished blogging about our Ukrainian dinner - it was not a hit - but we forged forward with the United Arab Emirates and both dishes were amazing.
About the UAE...
Here are some interesting facts we learned...Founded in 1971, the United Arab Emirates (UAE) is a federation of seven emirates: Abu Dhabi, Ajman, Dubai, Fujairah, Ras al-Khaimah, Sharjah, and Umm al-Quwain. 'Emirate' means 'state or province ruled by an Emir.' And 'Emir' means 'commander' or 'ruler' in Arabic.

Dubai is the most populated Emirate with over a third of the UAE population. I found two things fascinating about its population: (1) it's youthful; more than 50% of the population is under 25 years old. And (2) it's largely an ex-pat community; only 13% of the people living in the country are citizens. Eighty-seven percent of the population is made up for foreigners.

It makes sense that the country counts over 200 nationalities in its residents. Arabic is the official language though English, Farsi, Hindi, and Urdu are widely used.

The UAE has the seventh-largest crude oil reserves in the world. Venezuela, Saudi Arabia, Canada, Iran, Iraq and Kuwait are the first six.

The falcon is the UAE’s national symbol. Falconry is deeply entrenched in the Emirati culture and is a popular pastime.

And, I'll end with some disconcerting gender facts: nearly three-quarters of the college graduates in the UAE are women. Women are trained as muftis, Sunni Muslim scholars who interpret Islamic laws. Does that make them similar to lawyers or judges? But...domestic violence is legal if the beating leaves no visible marks on the victim. What?!?!

Our Connection to the UAE
While we have not been there, we have a connection to that country, a sad connection. Because the boys attend an International School, many of the teachers come and go. They leave the Monterey Peninsula for schools all around the world; similarly, we also get new teachers who have been overseas for many years and are just returning stateside. It's a fantastic exchange and one that I adore. I love talking to teachers whose horizons are much broader than mine!

In any case, one of our favorite teachers, R's 1st grade teacher, Ms. Z, left Monterey for the UAE and lived there for several years. When she came back for visits, we tried to meet up. Here we are, having dinner with her in San Francisco...she was the one who inspired R to choose the mandolin, so he brought his with us and he played for her. 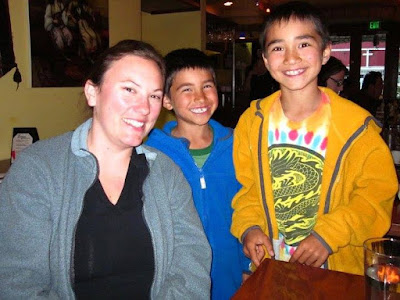 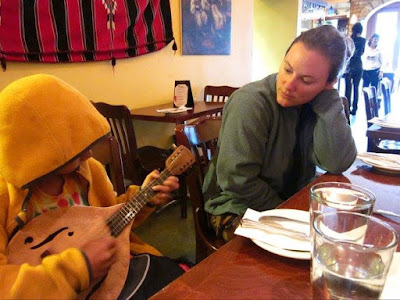 and here we are having a picnic on Carmel Beach...when we were able to meet Finn, her son. 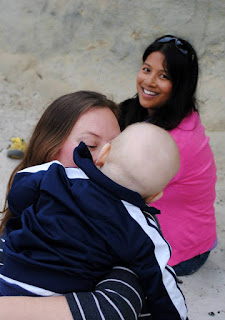 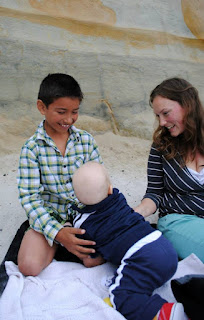 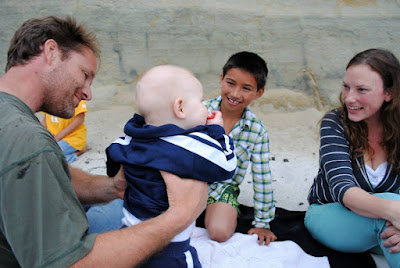 Sadly, Ms. Z lost her battle with brain cancer last year. She fought fiercely and we were hoping that it would not end the way it did. But we went to her celebration of life in the Fall and finally met her husband and her daughter. 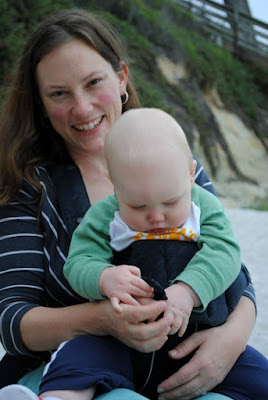 Though the world is darker without her, her light lives on in those two beautiful babies...and her memories burn in all of us. So, as we ate our Emirati dinner, we talked about her. 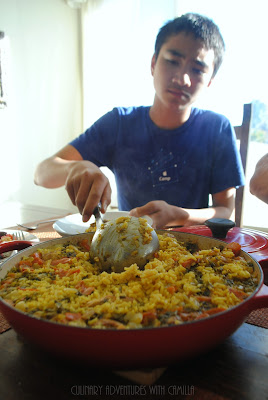 Dajaj Machbous is a spiced chicken and rice dish. Dajaj, meaning ‘chicken’ in Arabic, and machbous, denoting spiced rice, is a popular dish that's similar to the Indian dish biriyani in that the rice is cooked in the same pan along with the rest of the ingredients. This is not a traditional recipe as I adjusted to use the spices and herbs I had on-hand. 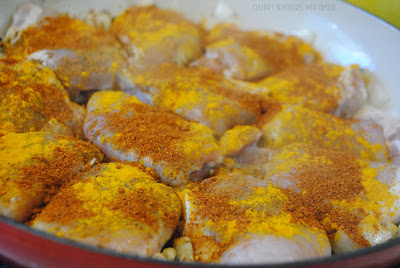 *I have gotten fresh Kaffir lime leaves in the produce section of Whole Foods and dried lime at a local Indian market.

Procedure
In a large pan with a tight-fitting lid, heat oil. Add the onions and garlic. Cook until the onions begin to turn translucent. Nestle the chicken into the pan so that it is all in a single layer. Sprinkle half of your spices on the top and nestle the bay leaves in between the chicken. Let the chicken brown for 3 to 4 minutes on that side. Flip the chicken over and sprinkle the remaining spices over the top. Cook for another 3 to 4 minutes.

Add the tomatoes and cook, stirring, until they begin to soften, approximately 2 minutes. Pour in the stock and add in the dried lime or Kaffir lime leaves. Bring the liquid to a simmer. Cover and let cook for 20 minutes.

Uncover and stir in the rice and herbs. The liquid should cover the rice and meat by at least 1". If it needs more liquid, pour in some water. Bring the liquid to a boil, cover, and reduce the heat to a simmer. Cook for 20 minutes. The rice should should be tender and the liquid completely dissolved. Keep covered and serve in the pan. 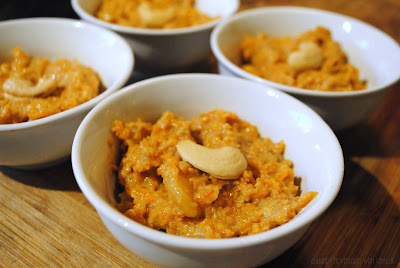 When I needed a dessert for this Emirati dinner, I came across a recipe for a carrot pudding that was similar in flavor profile to the Gajar Halwa we made when we cooked Singapore. Again, this isn't wholly traditional as I used what we had. Also, the Emirati recipe I found called for almonds; I had cashews. I wanted to use the rainbow carrots I had, D insisted that we use only the orange ones for this. And since he was the one doing all the grating, I went with it! 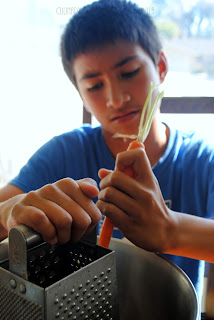 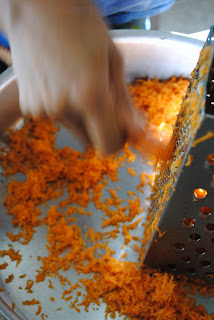 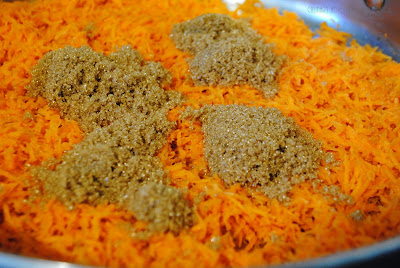 Procedure
In a large, flat-bottom pan, add the carrots, brown sugar, and 1 C milk. Heat until the sugar is dissolved. Add the rest of the milk. Once the milk boils, reduce the heat to a simmer then cook, stirring occasionally, until the milk is absorbed completely and the carrots are soft.

Add in the cashews, the butter, and the spices. Pour in the condensed milk. Continue cooking until the liquid is incorporated into the carrots and you have a thick pudding. Spoon into individual serving bowls and garnish with a cashew.

Moving Forward...
Well, this is a wrap on our UAE cooking adventure. We're headed to the United Kingdom next. I'll see what they want to do. We have done a Dickensian dinner for Christmas Eve in 2012: revised menu here. I roasted a goose, served Figgy Pudding, and pour Smoking Bishops. They'll probably still want to do a dinner. Stay tuned.