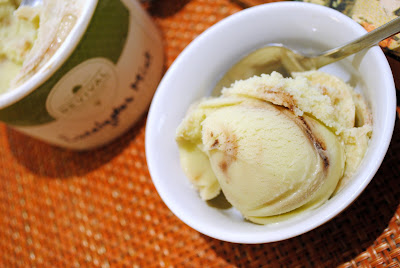 As I happily continue with my Foodie Reads Challenge, I am sharing The Ice Cream Queen of Orchard Street by Susan Jane Gilman as my third, and probably final, June read.* I might be able to squeeze in one more book this month. Maybe.

In any case, I had a gift certificate to a local bookstore (yes, we still have one!) from Christmas and this one caught my eye. We love ice cream and I thought this might be a nice novel wrapped around one of our favorite summer treats. I took it with me this past weekend. So, while the boys splashed in the pool at the hotel, I raced through this book. 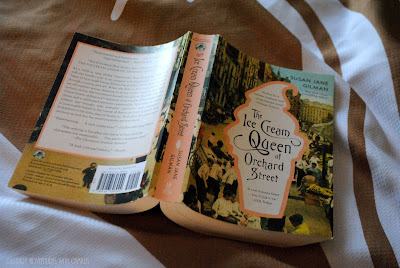 On the Page...
The Ice Cream Queen of Orchard Street spans seven decades, following Malva Treynovsky from when she and her family immigrate to the United States in 1913 from Russia to her transformation to Lillian Maria Dinello and, finally, her ascension to Ice Cream Queen status as Lillian Dunkle. This really is a rags to riches tale about a young immigrant who is struck by an ice cream truck. She is adopted by the family who injured her after her mother abandons her at the hospital.

I truly enjoyed the history, her (fictional?!) invention of soft-serve ice cream, and her fierce entrepreneurial spirit.

As she's explaining to kids about ice cream... "In fact, the last goddamn thing you ever want in ice cream is ice itself. We manufacturers constantly struggle to keep our products from crystallizing. The worst thing in the world is when ice cream develops that rash of frost that makes it gummy and stale."

"Here's what we do want in ice cream, though which nobody ever seems to grasp: Air."

"Air is what gives ice cream its butter-cloud consistency, its magical texture" (p.245).

But, as Lillian aged, she devolved into a truly unlikable woman, in my estimation - mine and a lot of others; she is convicted for tax evasion and explains it to her sister: "[I owe more] than a lot. So sue me: I was grieving. I got careless. I was missing Bert, and so I started shopping. And oh, hell. I suppose I misrepresented a few purchases. I suppose I helped myself to a few things. I got cute with the truth" ( p.491).

It's a shame that I grew to dislike her antics so much because I think there might have been a good book here. 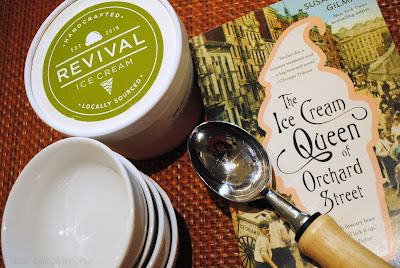 In the Bowl...
She's disdainful of other companies. "'Umlaut' was the nickname I'd given to another ice cream company. I had made it our policy never to dignify our competition by uttering their real names.... Umlaut, as I called it, was a company that was making waves lately because it produced 'super-premium,' a high-fat ice cream with a nearly unpronounceable name - two a's, an umlaut over one of them, and a hyphen, for Chrissakes."

"Umlaut had a new Chocolate Chocolate Chip ice cream that a food writer in New York magazine had described as 'transcendent...' (pg. 400).

She scoffs, "This Umlaut is nothing but a fad. 'Luxury ice cream'? Boysenberry? Carob? Are those even flavors? Who the hell eats that?" (pg. 401). 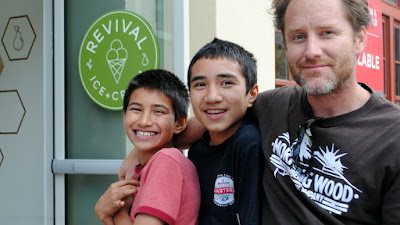 Well, the Mann clan does. We're definitely more of an Umlaut-kinda family. Actually, one of our favorite ice cream purveyors is Chef Ron Mendoza of Revival Ice + Cream in downtown Monterey. Now his flavors are transcendent! Pure deliciousness. And absolutely luxurious. 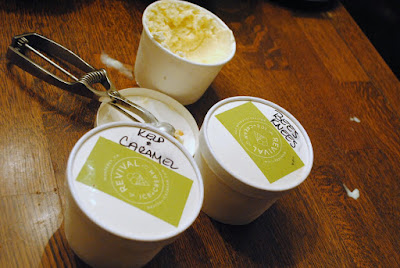 Chef Ron uses kelp, pollen, rose geranium, and all sorts of crazy, creative combinations. Tonight I picked up a pint of his Mint Eucalyptus Fudge. Is that even a flavor? Lillian would bark. Yes. And it's outrageously delectable. 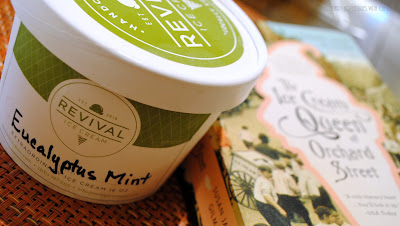 What about you? Do you have a Dunkle palate or are you more of an umlaut ice cream eater?

Here's what everyone else read in June 2017: here.