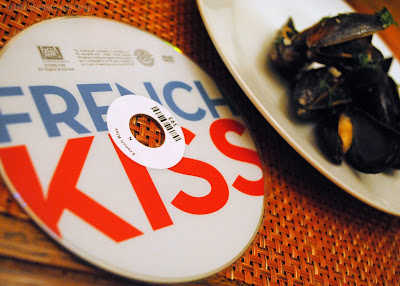 For the first Food'N'Flix of 2017, Heather of All Roads Lead to the Kitchen asked us to watch, or rewatch, French Kiss.* You can read Heather's invitation: here.

Heather wrote: "The majority is actually filmed in France, so there's some beautiful scenery. This isn't a particularly food-heavy film, but there are a few scenes that will offer obvious inspiration, and hopefully a whole movies worth of ideas to draw from (location, location, location!)."


On the Screen...
Okay, maybe I was not in the mood for this film today. Maybe I was already grumpy because my plans for a yoga class on the beach were foiled. But I actually found this film cringe-worthy.


French Kiss stars Meg Ryan as Kate, a slightly neurotic goodie-two-shoes. Does that look like a familiar character for her? Yep. She made millions in the 80s and 90s playing exactly that character. While it was adorable in When Harry Met Sally, I just couldn't stomach it in this movie. Her antics, her line-delivery...it was all too familiar.

In any case, American Kate is engaged to Canadian Charlie, played by Timothy Hutton. He goes on a work trip to Paris and Kate stays home because she's in the middle of getting her permanent Canadian resident status. She's not allowed to leave the country while her citizenship is in process. Remember: goodie-two-shoes.

Charlie calls, from Paris, and breaks off their engagement, telling her he's fallen in love with Juliette. Kate battles her fear of flying, decides to break the immigration rules, and hops on a plane to Paris where she is seated beside Luc, played by Kevin Kline, who is a French thief who hides two things he's stolen in Kate's baggage - a diamond necklace and a grape vine.

Kline is somewhat believable as a French scoundrel, but veteran French actors Jean Reno and Francois Cluzet are cast in fluffy roles as a cop and a crook. You can probably see where this goes. Predictably, Kate falls for Luc while trying to win back Charlie and Luc buys his way back into his family estate to continue the wine-making tradition with the vine he smuggled into France. Okay, that's it for the spoilers. If rom-coms are your thing, you might enjoy this fun, bubbly one set in France.


On the Plate...
Speaking of bubbly, I was inspired by the bottle of Crémant de Limoux I had in the fridge.

While I didn't care for the movie, I did see lots of food inspiration. I considered making something with the Blue Hubbard pumpkin on my counter. Kate had two pumpkins on her counter in Canada when she was cooking dinner with Charlie's sister. 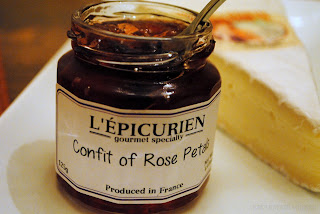 Inspired by lactose-intolerant Kate's cheese binge on the train, I did serve some brie with rose petal confit. But it wasn't really a recipe and I didn't have time to research, or verify, if France actually has 450 different kinds of cheese. 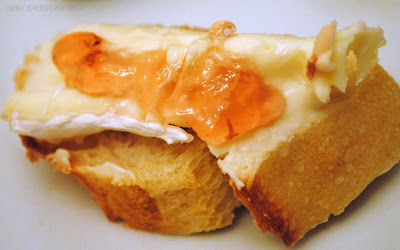 I also thought about some French desserts...like the one Kate ends up wearing after she trips over a dessert cart while spying on Charlie and Juliette. In the end, though, I opted to go for a family favorite: steamed mussels. I steamed these in French bubbly, Crémant di Limoux.

French bubbly was what Juliette was drinking when Kate spots an engagement ring on her finger and realizes that not only did Charlie dump her, but he's proposed to his new girl. 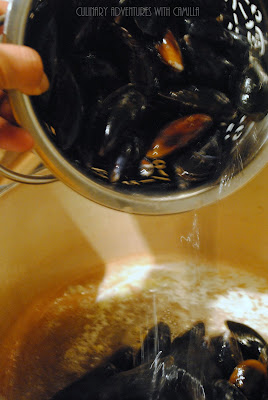 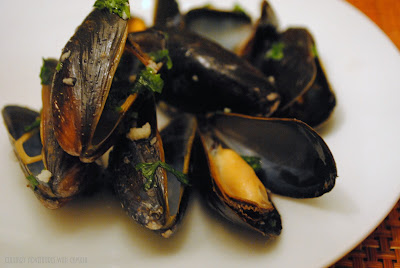 Procedure
Place 1/2 stick of butter and garlic in a large, flat-bottom pan with a lid. Add a splash of olive oil to keep the butter from burning. Heat until the butter is completely melted and foamy.


Pour in the bubbly. Once the wine begins to simmer, place the mussels in a single layer in the pan and add the remaining butter. Cover and steam until the mussels open, approximately 7 to 8 minutes. They are cooked and ready when the shells are completely open.

Remove the mussels to your serving platter. Turn up the heat on the sauce until it bubbles. Let it bubble until it thickens slightly. Season to taste with salt and pepper. Fold in the herbs. Pour the sauce over the mussels. Serve immediately with slices of baguette to mop up that delicious sauce. 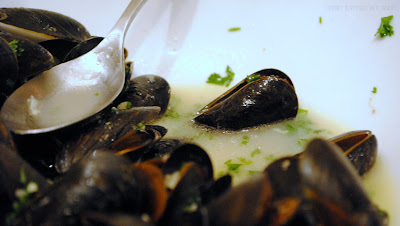