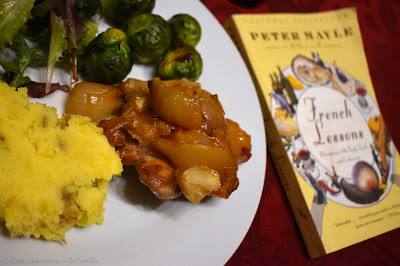 I have a few Peter Mayle books on my bookshelf. Last February, we read A Year in Provençe as a #Winophiles' tie in; you can read my post A Book, An Inspired Braise, and A (Surprise!) Bottle of Redfrom Provençe. And Chasing Cezanne was a Fun, Fluffy French Caper. So, when I was looking for something easy to read last weekend, I picked up French Lessons: Adventures with Knife, Fork, and Corkscrew by Peter Mayle*. 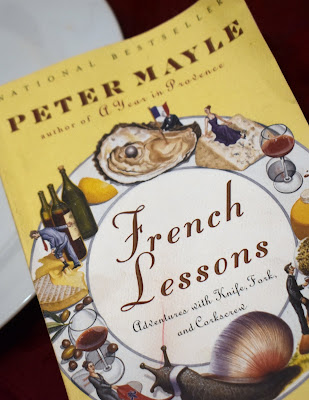 In French Lessons, Mayle offers readers a quirky food and wine map of France as he traipses around the country in search of culinary adventures. He attends the annual messe des truffes in Richerenches; that's a Sunday mass to celebrate the black truffle. He goes to Bourg-en-Bresse to join in the annual celebration known as Les Glorieuses where they honor and feast on the blue-footed Bresse chicken. In the chapter "Undressing for Lunch", he visits a famed clothing-optional beachside café in St. Tropez. And he is initiated into a brotherhood of frog leg tasters at an esteemed ceremony in Vittel.

In the 'I fell in love with France' genre of books, Mayle is a master. But, what sets him apart, in my mind, is his oft irreverent, wry observations. He can ferret out a story and paint a vivid picture of a the players; and though you can tell he's a devoted Francophiles, you also sense that he's fair in his assessments of the country, the countrymen, and their food. I find his books immensely entertaining and enjoyable. 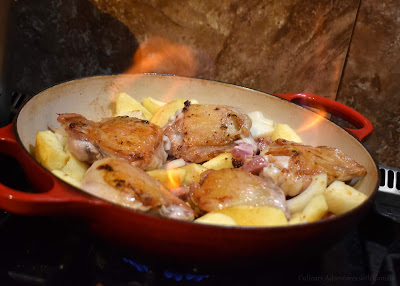 Admittedly, Poulet à la Normande isn't a dish that Mayle mentions in French Lessons. But in the chapter entitled "Love at First Sniff" - when he's recounting a stay in Livarot - he mentions Calvados.

"'Now what you need is a little Calvados, to settle the digestion.' Sadler whose ears are as highly tuned and sensitive as a bat's to certain stimuli, had heard the magic word. His digestion (that poor long-suffering process) would also be greatly improved, he said, by a nightcap. As he pointed out, the Normans invented Calvados. ...sitting around the kitchen table in a house belonging to a hospitable member of the organizing committee. A dark, anonymous bottle was produced. ...with a bouquet that brought teas to the eyes, a roundness that filled the mouth, a smooth warmth that spread from throat to stomach. 'Internal sunshine,' they call it" (pg 96).

Calvados is something I have on the shelf, but never really know what to do with it. So, I decided to search for recipes that include Calvados and came across this classic braise from northern France. Now, my version might not be completely tradition, but it was tasty. The ventrèche is my own addition and I went with whole onions, cubed, instead of pearl onions.

Let me start by saying that flambéing is always fun albeit a little challenging to photograph when you're alone and trying to not set yourself aflame. This dish brings together the autumn flavors of sweet apples, yeasty cider, cream, and chicken. It's not the blue-footed kind of chicken, but this was a tasty dinner in the middle of a busy week. I had it on the table when my family walked in from a long robotics meeting. 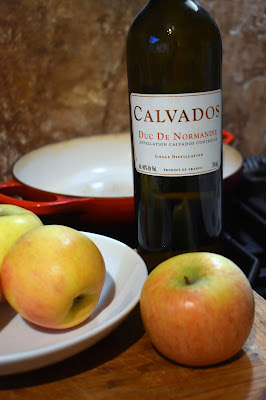 Add the ventrèche to the pan and cook until the fat is rendered and the pieces browned. Add in the onions and apples and stir to coat with the fat. Nestle the chicken thighs on top of the apples and onions. 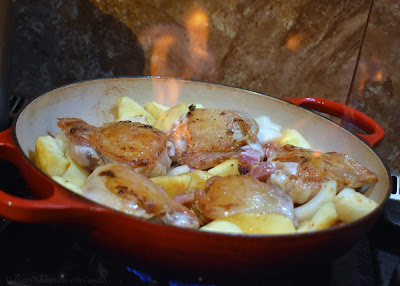 Pour the Calvados in a small saucepan and heat gently. When it begins to steam, use a stick lighter or long match to ignite it. While it's burning, pour the Calvados over the chicken and let it burn out. It might take a minute or two before the alcohol burns off and the flames subside.

Pour the cider over the dish and bring it to a boil. Cover and reduce the heat to a simmer. Cook for 35 to 40 minutes until the chicken is cooked through. 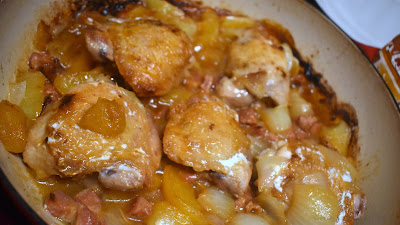 If the sauce is thick enough for your liking, simply drizzle the chicken with the crème fraîche or buttermilk. If you prefer it thicker, turn up the heat and let the sauce reduce.

Serve the dish immediately. I offered mashed potatoes, roasted Brussels sprouts, and green salad on the side.

Click to see what everyone else read in February 2020: here.
Posted by Camilla M. Mann at 9:33 AM