This is a sponsored post written by me on behalf of Résonance Wines in conjunction with the
December 2020 Tied Houses #Winophiles event. Complimentary wine was provided for this post
though no other compensation was received. This page may contain affiliate links. 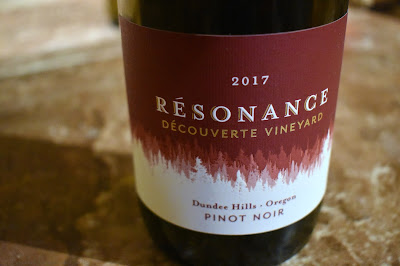 L.M. Archer is hosting the December French Winophiles event. You can read her invitation: here. She also arranged for several bloggers in the group to receive samples. I received a bottle of 2017 Résonance Pinot Noir. More on that soon.
In the meantime, these posts will go live before Saturday, December 19th. That morning, we will be live on Twitter if you would like to chat with us about Oregon and Bourgogne Tied Houses. Join us at 8am Saturday, December 19th. Just follow the hashtag #Winophiles; we will also be using #RésonanceWines #DomaineDrouhinOregon for our sponsors. So be sure to add those to anything you tweet so we can see it!
In the Glass 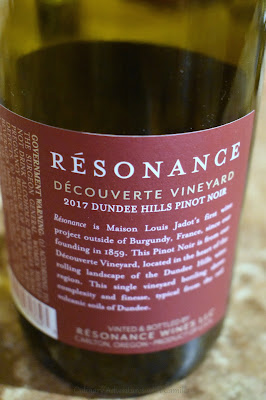 The idea behind this month's event - Oregon and Bourgogne Tied Houses - was for the bloggers to compare or contrast Burgundy wines that are made in Oregon. Fascinating premise, right? I thought so. And I received a bottle of the 2017 Résonance* Pinot Noir to pour and pair.
Résonance is Maison Louis Jadot's first wine project outside of Burgundy, France. While not completely versed in the Louis Jadot wines, they have appeared on my table. For Thanksgiving this year, I had paired the Louis Jadot 2019 Rosé with a Turnip-Potato Soup. And back in 2016, I served Cod Grenobloise + a Louis Jadot Chardonnay for a French Winophiles event. So I was excited to taste a Résonance wine.
According to my research the Louis Jadot team became interested in the terroir and wines from Oregon. And in 2013, they acquired a vineyard in the Willamette Valley, specifically the Yamhil-Carlton AVA region. To solidify the Jadot ties even more, the Résonance project is led by Jadot winemaker Jacques Lardière who has over four decades of experience in winemaking in Burgundy. He was the perfect pick to begin making wines in up and coming Pinot Noir regions.
In the glass, the wine has a bright ruby glimmer. On the nose, it is fresh and fruity, with a lot of red and black fruits. But it also has some mild earthy notes. On the palate, the wine has a freshness with a long finish.
On the Plate 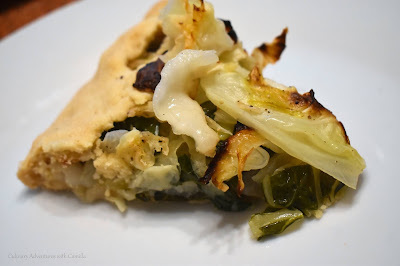 I don't actually remember what inspired me to pair this Galette au Chou, savory cabbage galette, with the wine. It might have just been that I wanted a buttery, flaky crust involved in the pairing and chose the vegetables that I had in the bin. Whatever the case may be, this was a great match with the Résonance Pinot Noir.
Ingredients makes one 10-inch galette 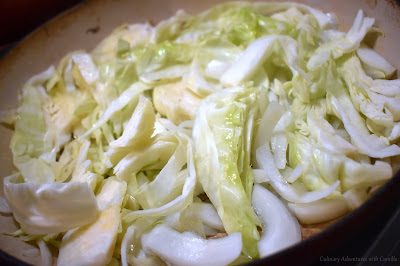 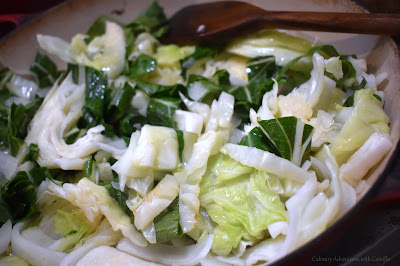 Pâte Brisée
Place the flour, ground almonds, and cold butter the bowl of a food processor. Pulse to combine. Alternate between adding cold water and vodka, 1 Tablespoon at a time, until mixture just begins to clump together. If you squeeze some of the crumbly dough and it holds together, it's ready. If the dough doesn't hold together, add a little more water and pulse again. Note that too much water will make the crust tough.
Once the dough comes together into a ball, wrap tightly in plastic wrap and refrigerate for at least 30 minutes before using. While you're waiting for the dough to chill, make the filling.
Filling
Place onions in a rimmed skillet with a splash of olive oil. Cook on low heat until the onions are softened and beginning to caramelize. Set aside.
Place the cabbage and greens in a rimmed skillet with a splash of olive oil - I used the same pot! - and cook for 5 minutes. The leaves should still be opaque, but just beginning to wilt. Set aside.
Assembly
Preheat the oven to 400 degrees Fahrenheit. Roll out the Pâte Brisée between two pieces of parchment paper. It doesn't need to be perfectly round. In fact, I like the organic edges on my crust. Place on a baking sheet. 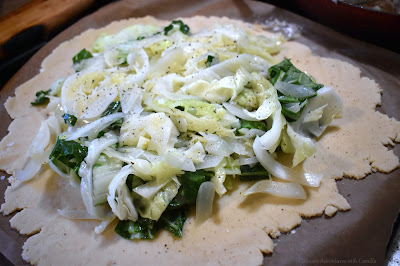 Sprinkle 1/4 cup of cheese over the crust and spoon the caramelized onions on top of that. Arrange the greens over the onions. 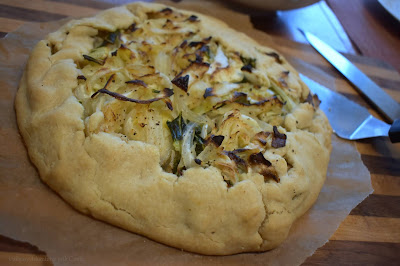 Bring the edges of the crust up and over the rim of the cabbage. Press down gently on the dough. Sprinkle the remaining cheese over the top, followed by salt and pepper. Drizzle with olive oil. Place in the oven and bake for 50 minutes or until the crust is golden brown and flaky.

Let cool for 10 minutes before slicing. Serve immediately. Though, if you have leftovers, this is just as good cold the next day.

Well, that's a wrap on the French Winophiles' Oregon and Bourgogne Tied Houses event. Happy Holidays! Joyeux Noël! The #Winophiles will be back in January when Jeff of Food Wine Click! kicks off 2021 leading a discussion of What’s New in Bordeaux. Stay tuned...

on the web, on Facebook, on Twitter, on Instagram
*Disclosure: I received compensation in the form of wine samples for recipe development and generating social media traction. My opinions do not necessarily reflect the opinions of the organizer and sponsors of this event.
Posted by Camilla M. Mann at 9:11 AM