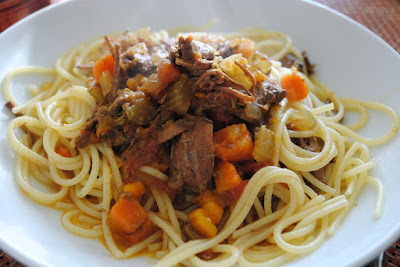 I almost didn't participate this month because Jake and I have been reducing our carb intake and pasta is one of those that was easy to cut out. But, seriously, how could I resist?!?! So, I threw some beef in the Dutch oven and went to work. This was a fantastic lunch break today. I love the flexibility of this preparation. Today I used red wine because, well, because we're in the middle of #MerlotMe month and I have a lot of partially consumed bottles of wine. But you can use more broth, white wine, and even cranberry juice if you wish.

And, I know, this isn't really about the pasta...it's about the sauce. Oh, well. No one eats pasta plain, do they?!

Ragu vs. Sugo...and a Performance Artist in Rome Covered in Pasta
I've heard these terms used interchangeably, but the way I've always used them is different. 'Sugo' refers to a sauce that's tomato-based while 'ragu' is also tomato-based, but requires meat. So, I'm calling this a ragu...and going to share a funny 'sugo' story. I don't know why this popped into my head; I haven't thought about this night in decades. But I shared the story with my boys and they laughed and laughed.

So, you may know that I lived in Rome for 13 months after I graduated from college. I was working as an au pair and all of my friends were also au pairs, but my best friend was an au pair from Denmark: Rikke. She and I were both taking care of school-aged kids, so after we dropped off our charges at school, we met up to see something beautiful everyday. Maybe it was a new-to-us church or a museum. But, we wanted to take full advantage of our home city for the year and learn something new everyday.

One day, when Rikke was on the bus to come meet me, she met a guy. I think they were reading the same book or he commented on the book she was reading. Those details are fuzzy. In any case, the bus ride ended with her being invited to a party that night. Because she didn't know him and because she didn't want to go by herself, she talked me into going with her. Though going to a party late at night wasn't exactly what I wanted to do, I definitely didn't want her going alone, so I agreed.

We arrived at the address and the building was pitch black. But we noticed there was a glow from some narrow windows at the street level. Great, I thought, this is a creepy, subterranean party. Someone emerged from a staircase we hadn't noticed before and we said that Elio had invited us. They motioned for us to come in.

We wound our way down the staircase, squeezing between people until we emerged in a cavernous basement. Bottles of wine were lined up on a table and a cacaphony of chatter and laughter invaded our ears. I remember leaning over to Rikke and asking, "Do you see him?" No, she whispered back. We moved further and further into the party and I kept asking her if she could see Elio. No, not yet! We continued searching for this mysterious guy who had invited her to this party.

I vaguely remember different art pieces on the walls, but I could be wrong. It's been over two decades since that night. But what happened next was seared into my brain forever. Someone dressed all in black clapped their hands and all eyes turned to him. We were told to follow him.

We entered through a doorway draped with ribbons or crepe paper. The room was tiny and dimly lit. We walked single file around a table. On the table was a man. A naked man. Well, naked with pasta and sauce covering his private areas. As we got closer to the table, Rikke gripped my arm and squeezed hard. "I found Elio." O dio!

We waited until he emerged, clad in a robe this time. And, as soon as we congratulated him on his performance art, we high-tailed it out of there. 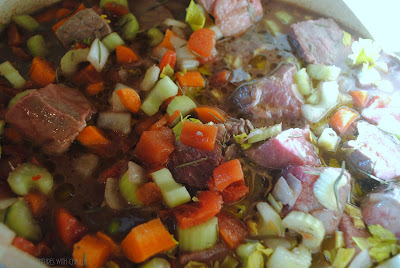 Procedure
Heat the oil in a large, dutch oven. Add the beef into the pot. Sear on each side for  3 to 5 minutes - until a nice brown begins to appear. Add the onions and garlic to the pot. Let them cook until the onion is translucent and beginning to caramelize. Add in the carrots and celery. Cook for another 3 to 5 minutes.

Pour in the broth and red wine. Add in the tomatoes and stir in the bay leaves, thyme, basil, parsley, and red pepper flakes. Bring to a boil. Then, reduce the heat to a simmer and cover. Let the meat braise for 3 to 4 hours - longer is fine, if you need to. You can leave the beef in cubes or shred the meat a little bit.

To serve, mix some of the ragu in with your pasta. Portion out your pasta into individual servings. Spoon more sauce over the top. Serve immediately. You can grate parmesan over the top, if you like; I didn't have any this afternoon, so I skipped it.