By Camilla M. Mann October 17, 2018
This is a sponsored post written by me on behalf of Melissa's Produce.
I received complimentary product for the purpose of review and recipe development,
but all opinions are honest and they are my own. This page may contain affiliate links. 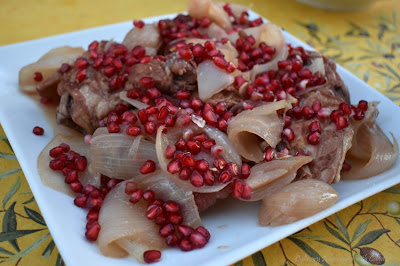 You can read in my recipe post - Passionfruit-Vanilla Panna Cotta - how Melissa's Produce ended up sending a selection of their 'Freaky Fruits' to me and some of my Festive Foodies pals. And, because there was just too much goodness to fit into a two-day event, I am sharing some bonus recipes as I recipe test for October's #FreakyFruitsFriday. 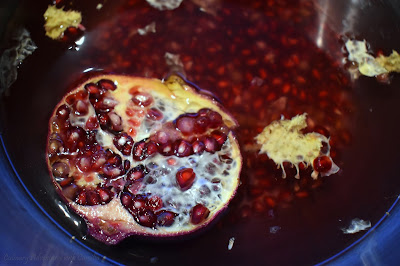 One of the freaky fruits they sent was a pomegranate. It's not too freaky, but can leave bloody pools all over your workspace. I have a trick to getting out all of the arils with minimal carnage. I'll share in a second. But, first a bit about the fruit.

Originally from Persia, pomegranates are one of the oldest cultivated fruits. Ancient Romans used the skins in the process of tanning leather. Perhaps due to the fruit's princely blossom crown, it has gained distinction as a royal fruit. Chaucer, Shakespeare and Homer have all extolled the virtues of the pomegranate in literature. The Moors brought the seedy fruit to Spain where Granada was named for it. The first pomegranate was planted in Britain by King Henry VIII. It reached our shores by way of the Spanish conquistadors.


This is my tried and true method for getting out every single aril without making my counter look like I massacred something...

Roll the fruit around on the counter gently - not so much that you crush the arils, but enough to loosen the fruit from the skin. Slice the fruit in half. Submerge the two halves in a bowl of cool water and gently the edges to open the fruit. Turn the half upside down in the water and hit it with the back of a wooden spoon. The arils will fall into the water with the seeds sinking to the bottom and any pieces of pith floating to the top. Remove any stragglers with your fingers. Scoop out any pith and drain. Voilà! 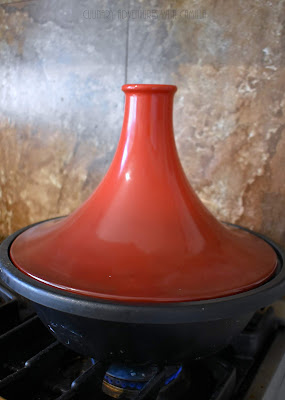 Because of the pomegranate's Persian roots, I decided to make this dish in my tagine, but you can easy use a Dutch oven or an pot in which you braise. A tajine or tagine is a Maghrebi dish named after the earthenware pot in which it is cooked. So, it refers to both the cooking vessel and the resulting food; it is also called a maraq/marqa in North Africa and the Middle East. It's a pretty amazing pot. 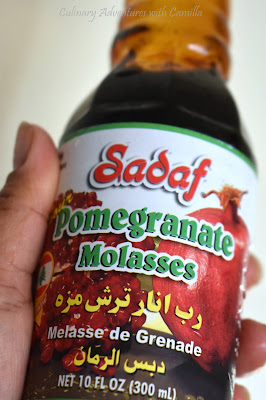 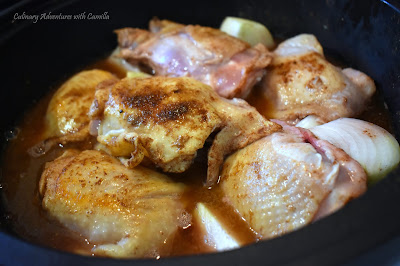 Heat half of the oil in heavy skillet, or base of the tagine. Add chicken and brown on all sides. Heat the remaining oil in the tagine. Add onions and cook over medium-low heat until lightly browned.

Tuck the cinnamon sticks into the onions and place the browned chicken on top of that.

Pour stock over chicken and drizzle with pomegranate molasses. Sprinkle with salt and pepper. Bring to a boil, then cover. Reduce to a simmer and cook for 30 minutes. 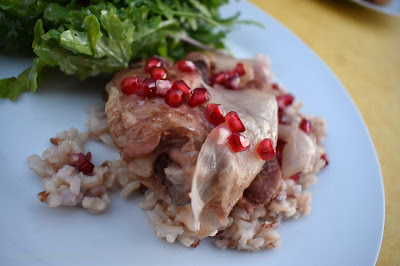 To serve, place a scoop of cooked rice on an individual serving plate. Top with braised chicken and cooked onions. Sprinkle with pomegranate arils and serve immediately. I served this with a lightly dressed wild arugula salad.