In Search of an Aniseed Liqueur Recipe #FoodieReads 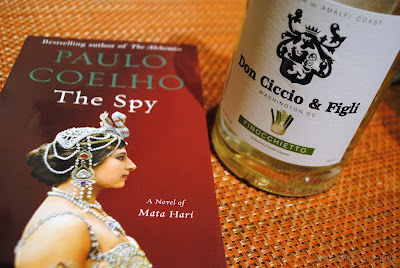 I decided to share this book with the Foodie Reads Challenge, not because it involves a lot of food (it doesn't), but because I'm inspired to track down a recipe (help!). The Spy: A Novel of Mata Hari by Paulo Coehlo* has me longing to make my own aniseed liqueur. I had some fennel liqueur in my cabinet...that's a good place to start, right?

On the Page
Before I picked up this book, I had never heard of Mata Hari. Mata Hari is the stage name for Margaretha Geertruida MacLeod, née Zelle, a Dutch exotic dancer and courtesan who was accused of espionage during World War I. She was convicted of spying for the Germans and executed by firing squad in France.

Coehlo's book is a quick, easy read that succeeded in piquing my interest in her. I plan to read Mata Hari: The Controversial Life and Legacy of World War I’s Most Famous Spy by Charles River Editors and Mata Hari's Last Dance: A Novel by Michelle Moran. Soon!

Here's the passage that inspired me...

When I entered the office, I saw a man surrounded by every luxury denied to the Dutch: imported cigarettes and cigars, libations from the four corners of Europe,cheeses and charcuterie that had been rationed in the city's markets. ...He got up, asked what I would like to drink. I chose aniseed liqueur, which the consul served himself in Bohemian crystal glasses (pg. 116).

In the Bottle
It turns out that aniseed liqueur is not as uncommon as I thought. In France, they have Absinthe; in Italy,  you'd find Galliano and Sambuca; and, in Greece, it's Ouzo. Other versions include Columbian Aguardiente, Spanish Anis de Toro, Middle Eastern Arak, Bulgarian Mastika, and Turkish Raki. So, does anyone have a recipe I can try?