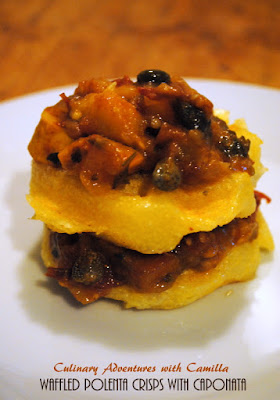 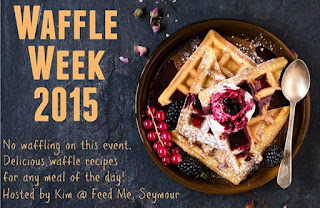 Welcome to Waffle Week! This is my first time participating in Waffle Week and I, admittedly, and not really a waffle aficionado. That might change after this event. But I do make waffles. For August's #FoodieExtravaganza I made a savory Chicken and Mashed Potato Waffles. I've made waffles with olive oil and waffles with coconut milk. Not surprisingly, I opted to go savory for this post.

I was also inspired by the flats of tomatoes I picked up from Serendipity Farms. One of my favorite things to do with tomatoes is make a huge batch of caponata. Caponata is an agrodolce (sour-sweet) dish from Sicily that features eggplants, squash, tomatoes, and capers in a sweetened vinegar sauce. I usually toss it into pasta or smear it on slices of bread. For this, I decided to spoon it on top of mini polenta waffles. You can make the caponata the day before you want to make this dish. Just heat the portion you plan to use.


Many thanks to Kimberly of Feed Me Seymour for hosting this event. 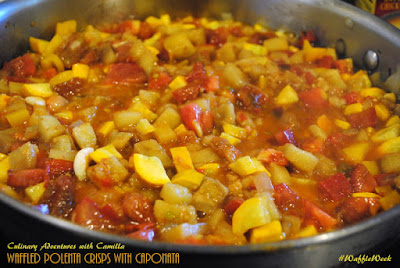 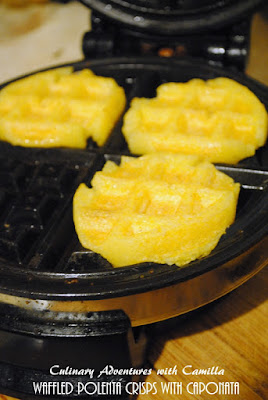 In a large, flat-bottom pan, heat your olive oil. Then saute the onions, garlic, and celery until the onions are softened and beginning to turn translucent. Add the eggplant and another splash of olive oil. Cook until the eggplant is softened and beginning to look less opaque. Add in the squash, bell peppers, tomato, and capers with brine. Bring to a boil, then reduce to a simmer and cook until the tomatoes have reduced to a thick sauce.

In a separate pan, dissolve the sugar into the vinegar to form a syrup. Pour the syrup into the eggplant and fold in the herbs.

Polenta Waffles
Heat your waffle iron and brush the heated iron with melted butter. Place polenta slices on iron. Press iron down until it closes all the way. Cook until the polenta is waffled and nicely crisped and browned. Remove from iron with a spatula and fork, then place in a warm oven until you have cooked all of your waffles

To Serve
Layer polenta waffle crisps with a dollop of caponata. I served a double-decker for our appetizers.

Here's what the rest of the #WaffleWeek2015 crew brought to the table...