By Camilla M. Mann August 13, 2021
This is a sponsored post written by me on behalf of L'Ecole.
Complimentary wine was provided for this post and this page may contain affiliate links.
However, all opinions expressed here are my own. 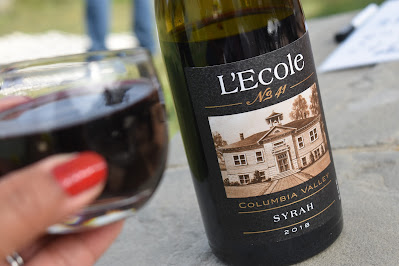 If you're been following my blog, you'll know that I'm doing a series of monthly posts in collaboration with L'Ecole Winery.* A group of us participate in a virtual tasting with their marketing manager, the winemaker, and the general manager and discuss timely topics. This month, we are honoring barbeque season with their 2018 Syrah. 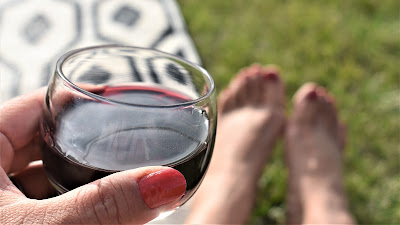 Winemaker Marcus Rafanelli has a soft spot for Shiraz (Syrah!). He told us that it is one of his favorite wines to make and that a bottle of Syrah - the 1988 Columbia Winery Red Willow Vineyard Syrah - actually brought him to tears. Syrah was only introduced in Washington in 1986, so it's one of the newer Washington varieties though it is now the third most common red wine varietal behind Cabernet Sauvignon and Merlot.
The grapes for this wine are sourced from four different vineyards: Stone Tree, Candy Mountain, Estate Seven Hills, Summit View. The composition is 80% Syrah, 18% Grenache, and 2% Mourvèdre. 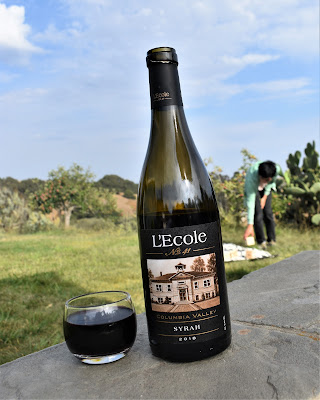 This is a jammy, laid-back wine with smooth tannins and a good acidity. Its smoky earthiness lends itself well with the grilled foods that abound during barbeque season. 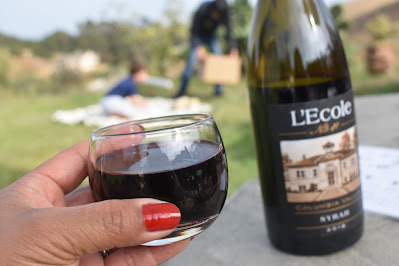 And I was perfectly content to sip and share in our friends' backyard for a burger cookout.
Burger Order 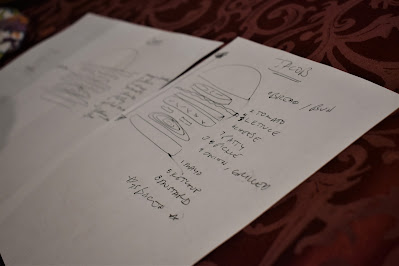 You may be wondering what I mean by 'burger order'. So, apparently there is a prescribed order of how ingredients are assembled on a burger to maximize flavor and texture. This topic occupied at least an hour on a hike the boys and I took. So, we drafted out our initial thoughts and invited ourselves over to Jenn and Mike's house to have Mike man the grill. 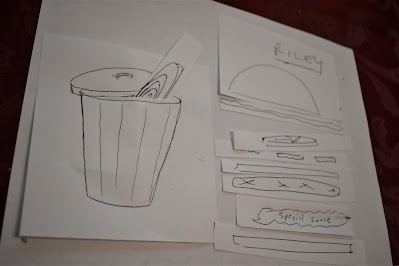 I had to chuckle at this visual. See that garbage can? That's where our older son says that onions belong...definitely not on his burger! 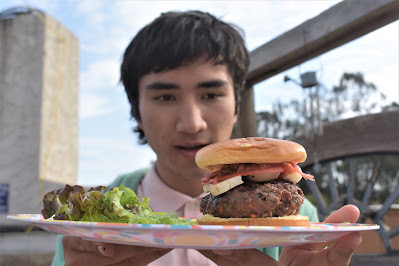 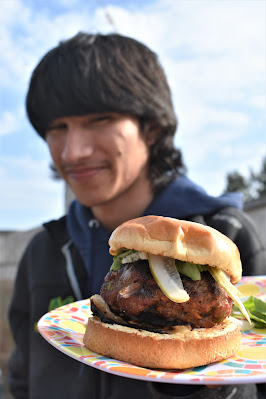 Our favorite seven-year-old had a different order... 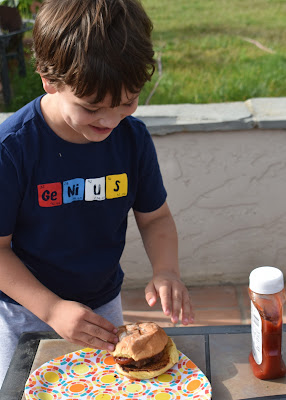 Isn't he adorable? And I love that he was fully participating in determining his perfect burger order. 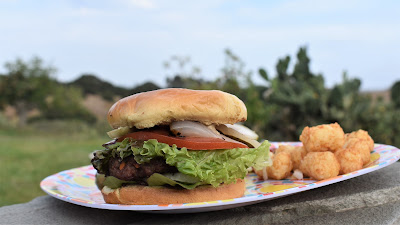 This dinner was the perfect pairing with the Syrah. There's an underlying salinity in the wine that counters the jamminess and makes it fantastically savory.
Yard Games 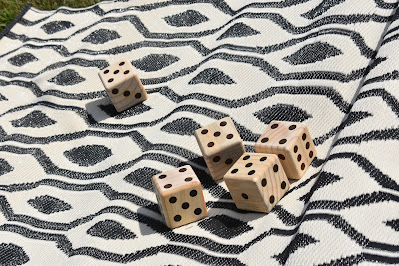 While the dads grilled, the moms and kids played a mind-stretching round of Yardzee. I was asking for some rolling guidance and my duo told me that it was about time I mastered the probability theories of mathematics. Oye. 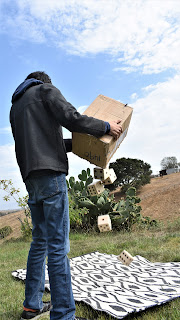 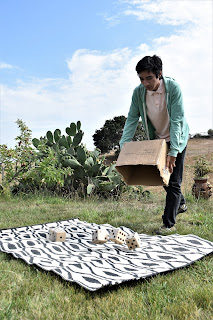 R won. I'm not surprised. Besides Jenn, he has had the most math classes. In all seriousness though, we could practically watch his mind churning as he calculated probability of the rolls he needed. 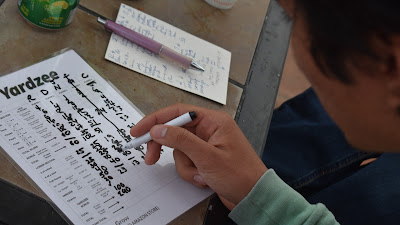 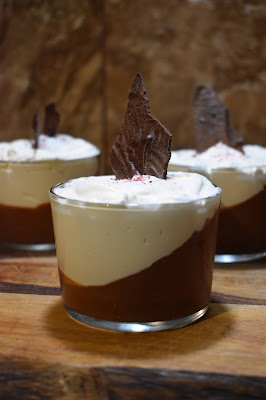 During the virtual tasting, Marta levied a challenge for me specifically: Camilla, I'd like to see you pair the wine with chocolate. Challenge accepted. I rarely back down from a challenge...and a culinary challenge is always a blast. Admittedly, some people think chocolate and wine is a natural match. But I have found more bad chocolate-wine pairings than good.
Marcus mirrored my sentiment and shared that Syrah or Shiraz with dark chocolate and raspberry was a perennial winner. So I started with that in mind: chocolate plus a red fruit. I considered pomegranate, but landed on using the Morada salt that I recently bought from Big Sur Salts. It's made with a local elderberry syrup, sea salt, hibiscus, rose bud, and lemon zest. I figured it had the requisite funk for this chocolate experiment.
Morada-Salted Chocolate Mousse 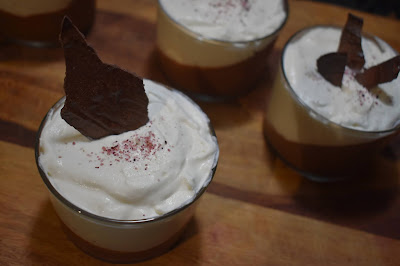 When I started to brainstorm about what to make for this challenge, I was thinking about salted chocolate chip cookies or maybe dark chocolate brownies with a swirl of raspberry jam and a dusting of salt. But chocolate mousse was the consensus between my chocolate lovers. Done! 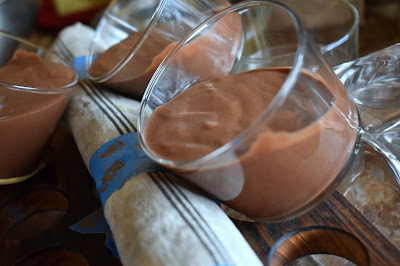 And because I constantly like to challenge myself with new techniques, I wanted to try and make a diagonally-set chocolate mousse. When Jake walked by, he paused, "Why don't you just use some rice or dried beans to hold them at an angle? It would be easier than that," he said, gesturing at my tea towel, tape, and some precariously balanced glasses. Uh-huh. Why didn't I think of that? 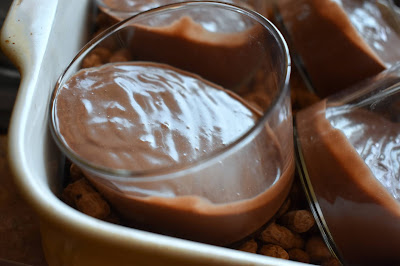 This chocolate mousse is light yet intensely chocolate and it's relatively easy to make. You just need a little patience.
Ingredients serves 6 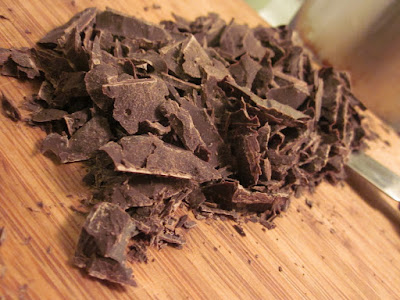 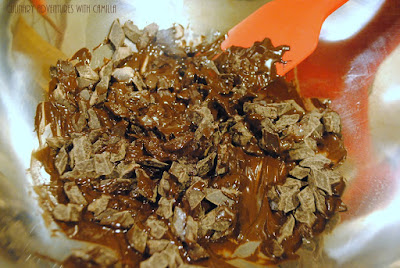 Create a bain-marie by placing chocolate and butter in a stainless steel bowl and nestling it over a saucepan of simmering water. Stir with a wooden spoon or spatula until the chocolate is melted and the mixture is smooth. Let the chocolate cool for a few minutes, then whisk in the egg yolks, one at a time. The mixtures should be smooth and glossy. Set aside. 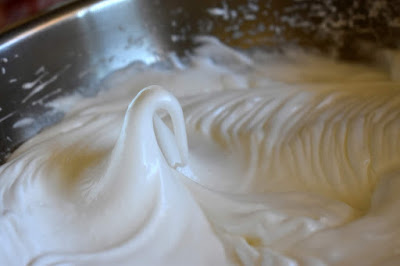 In a medium mixing bowl, beat the egg whites until soft peaks form. Gradually beat in 1/4 cup of sugar; continue beating until stiff peaks form. See photo above. The peaks will stand straight up when the beaters are lifted from the mixture. Using a large rubber spatula, fold the egg white mixture into the chocolate mixture until uniform in color. Set aside.

In another mixing bowl, beat the whipping cream until it begins to thicken up. Add the remaining 2 Tablespoons of sugar and the raspberry liqueur. Beat until the cream holds medium peaks. Fold the whipped cream into the chocolate mixture, making sure it is fully incorporated but don't mix it too much as you'll deflate the air you've added. 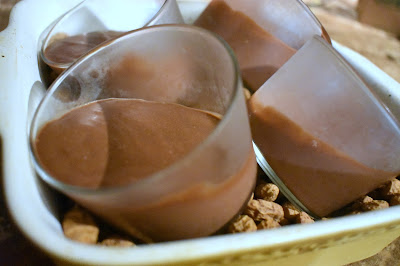 Divide the mousse between 6 individual glasses. If you are planning to let the mousse set diagonally, place beans and rice in a baking dish. Angle the glasses in the dish so that they sit at a diagonal. Cover, place in the refrigerator, and chill until set, approximately 3 to 4 hours, but at least two hours. 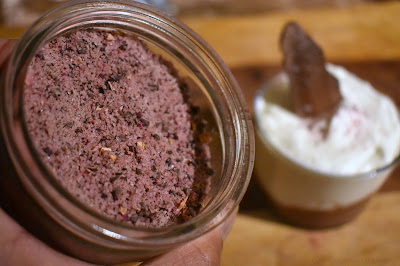 Before serving beat the whipped cream into medium peaks and scoop it into your glasses. Sprinkle with salt and top with chocolate shards or shavings. Serve immediately. 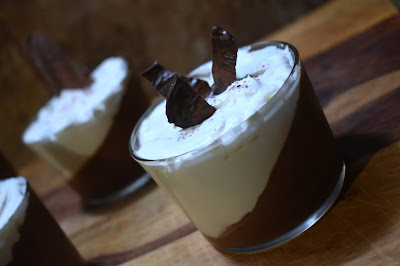 Well, I'm still not a huge fan of chocolate and wine, this mousse was a nice match for the Syrah. I might cut down on the cream for the next version, but it did look cool.
The final four months of the year will have us exploring more of L'Ecole's red wine. Stay tuned!