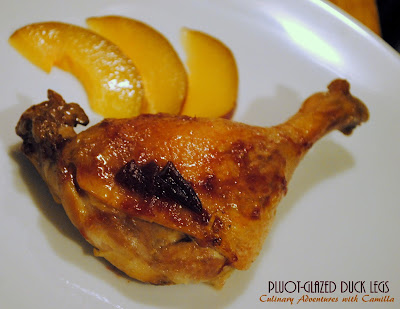 This month the Italian Food, Wine & Travel - #ItalianFWT - blogging group is traveling to Valle d'Aosta. Follow along the journey with my other Valdostano fans.  You can also chat with us live this Saturday morning at 11am EST on Twitter at #ItalianFWT.  Hope to see you there!

Nestled in the Alps, Valle d’Aosta is a unique region of Italy as it's isolated by the mountains and highly influenced by its French neighbors. While many Valdonstani people speak all three languages, Italian and French are the official languages with Valdôtain being a common local dialect.

The Other #ItalianFWT Offerings... 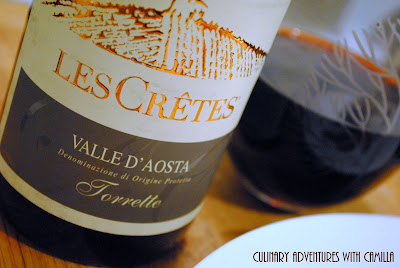 Valle d'Aosta is Italy's smallest winemaking region in both acreage and case production. Three-quarters of the area's wines are red, made mostly from the Pinot Noir, Gamay and Petit Rouge varieties. There is a white wine that I tried, unsuccessfully, to locate - a white wine made from the indigenous Prié Blanc grape. I'll keep looking.

But for this pairing, I tracked down a bottle of Les Cretes Torrette 2011. It's a blend of Petite Rouge (70%) and other indigenous red grapes (30%); and it's aged completely in stainless steel. Even without any barrel aging, it has an intriguing smokiness and heft. Laced with dark fruit and an delicate earthiness, I thought this would pair well with some duck. And to mirror the plum I was getting on the nose, I glazed the duck with some homemade pluot jam. 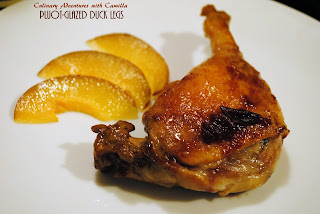 There were several other traditional dishes from Valle d'Aosta that I longed to make, but I didn't get around to it. I will! They have a minestra di castagne e riso, a thick soup made with chestnuts and rice and  and carbonade, which is either a stew of salt-cured beef, red wine, and spices, or roe deer stewed in red wine with vegetables, herbs, grappa and cream. I do have some venison in my freezer. It's not roe deer, but it will suffice. 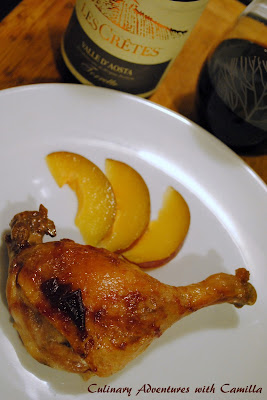 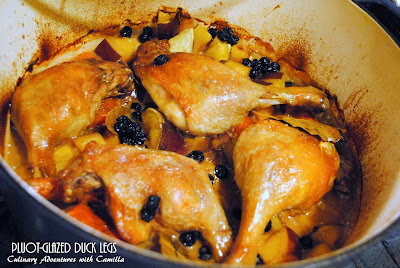 Procedure
Braised Duck
Preheat oven to 375 degrees F. In a Dutch oven, place duck legs, skin side down. Turn heat to medium. Cook for 6 to 7 minutes until the fat is rendered and the skin golden and crisped. Flip to the other side and cook for another 2 to 3 minutes.

Remove the duck to a plate. Place the onions, fennel, and celery root in the Dutch oven. Lay the browned duck pieces on top. Pour in the stock, wine, and add blueberries and pluot pieces to the pot. Bring to a boil, cover, and place in the oven. Braise for 90 minutes.

Raise the temperature of the oven to 450 degrees. Return the duck to the oven, uncovered and roast for 10 to 15 minutes until the duck is browned and the skin on top crispy.

Quick Pluot Jam
While duck is in the oven, make the jam. Place all of the ingredients in a medium saucepan over medium-high heat. Bring the mixture to a boil, then reduce the heat to medium and simmer until the pluots soften and no longer hold their shape. Season to taste and continue cooking until the jam coats the back of the spoon.

Just before serving, spoon some of the pluot jam over the duck legs, spreading it thinly over the skin. Return to the oven for 3 minutes. To serve, plate the duck. Garnish with slices of pluot.
Posted by Camilla M. Mann at 9:30 PM