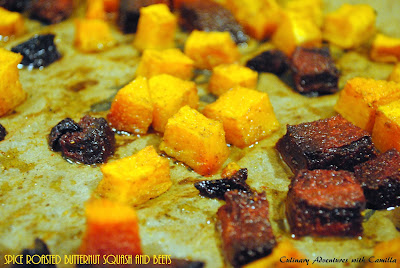 It's time for Group B's November 2015 Secret Recipe Club reveal. This month I was assigned to Morsels of Life which is written by CJ.

Her cooking philosophy is pretty simple and straightforward. She reports: "I like using everyday materials and easy to prepare (aka lazy aka efficient) methods. Maybe it’s the engineer in me, but I’m a fan of efficiency." She admits that she doesn't use exact measurements when cooking, but she lists them as a way to get an idea of how much she used.  And this sentiment, I really like - "Generally, if you like something, use more; if you dislike something, use less, substitute something else, or just eliminate it altogether. You’ll probably be fine."

She has some great How-Tos posted on her blog, including how to cut a mango, how to chiffonade, and how to cut a pineapple. I am a sucker for any kind of slaw, so I was tickled to see that CJ has an entire series on cole slaw, including basic cole slaw, Asian cole slaw, shrimp cole slaw, and a Tex-Mex slaw. Given the season - it is pumpkin time! - I thought about making her Pumpkin Bread Pudding or Spiced Pumpkin Bread.

But I decided to go with her Spice Roasted Butternut Squash because I had two on my counter and am always looking for new ways to use them. This was a quick and easy way to prepare the squash and has endless variations, limited only by your imagination or whatever spices you have in your pantry. I added some beets to stretch the ingredients; I wanted leftovers and didn't have any more squash. I also added some cumin, cinnamon, and ginger to go complement a seafood curry I was serving during the same dinner. It was delicious and I am glad to have this preparation in my repertoire. Thanks, CJ. 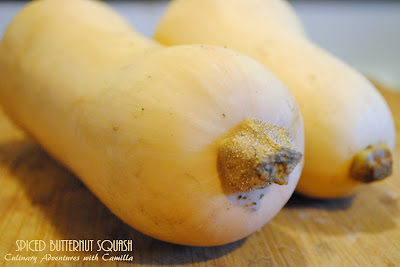 Procedure
Preheat oven to 400 degrees F. Toss the diced butternut squash with half  the salt and olive oil. Spread it in a single layer on  a parchment-lined baking sheet. Roast until tender, approximately for 30 minutes.

An InLinkz Link-up
Posted by Camilla M. Mann at 9:05 PM