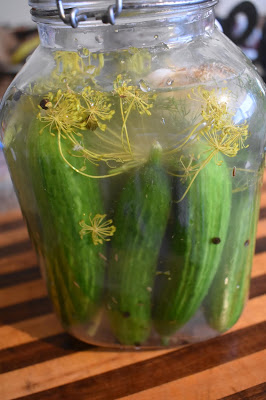 This month, I hosted the Food'N'Flix group and asked them to watch The Pickle Recipe. You can read my invitation here. Here's what the bloggers shared...

Ogórki Kiszone
by A Day in the Life on the Farm 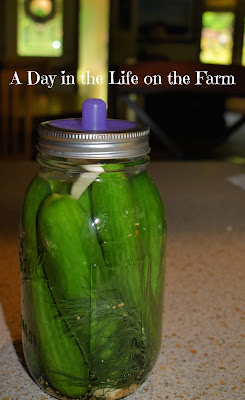 Wendy wrote, "I had never heard of this 2016 film before. I was surprised to see that it was filmed here in my home state Michigan, set in Detroit. I love watching films that are filled with familiar images."  She describes the movie as "a fun, light hearted comedy that reminds us of what is truly important in this world.  Joey learns many lessons while struggling with his conscience and his relationships." And Wendy whipped up her fermented Polish dill pickles. I can't wait to try her recipe - Ogórki Kiszone.
Beet Pickled Eggs
by Amy's Cooking Adventures 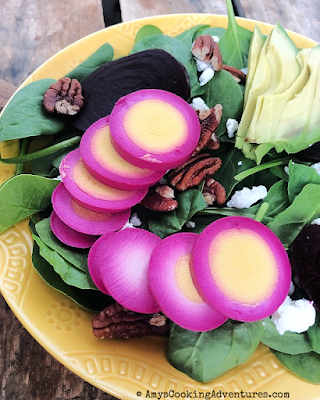 Amy was unimpressed by the movie, writing, "The Pickle Recipe is a fairly underwhelming film in which our protagonist, being short on cash, tries to hoodwink his grandmother out of her famous pickle recipe with hopes to sell it to the highest bidder. Of course, things don’t turn out as planned, hijinks occur, lessons are learned, relationships built and the predicted happy ending." And though she isn't a fan of homemade pickles, she couldn't resist making some visually stunning Beet Pickled Eggs to share with the group.
Butter Roasted Chicken
by Literature and Limes 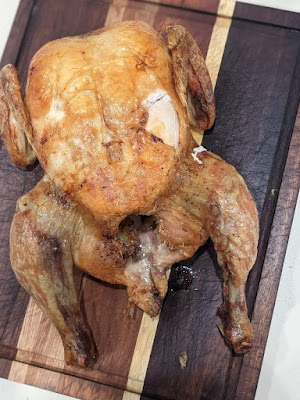 Elizabeth joined in the fun and games. I chuckled aloud when I read this in her post: "...Joey has to find someone that his grandmother trusts to hand the recipe over to. As a devout Jewish woman, she tells him she would only trust a rabbi. Trickster Joey gets the help of his friend to pose as a rabbi. Now his friend is not Jewish, so must learn traditional Jewish prayers and sayings to convince grandma that he is who he says he is. Grandma invites Joey and the ‘rabbi’ over to her house for dinner and serves a roast chicken and salad. She is temporarily tricked until she sees a part of this ‘rabbi’ that no rabbi would have. So alas, I made chicken." I am looking forward to trying her Butter Roasted Chicken soon.
Unc's Pickles
by Eliot's Eats 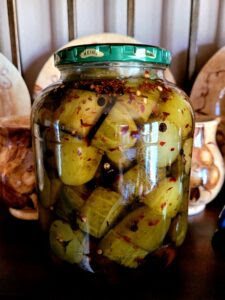 Debra's assessment of the movie was this: "The film is obviously not a mega-studio blockbuster with slick filming and editing, but it was still cute." And Joey, the grandson, reminded her of one of her cousins. "Every eyebrow lift and mannerism….it was uncanny," she shared. She jumped into this event with so many mouth-watering pickles, offering a line-up of previously posted pickles including Pickled Grapes, Pickled Cherry Peppers, Pickled Mustard Seeds, and Pickled Wild Onions. But the recipes she shared for this event was her favorite uncle's pickles. I will definitely be trying her Unc's Pickles as soon as I can. They sound fabulous.
Garlic-Dill Saltwater Pickles
Also Called Half-Sour or Lacto-Fermented Pickles 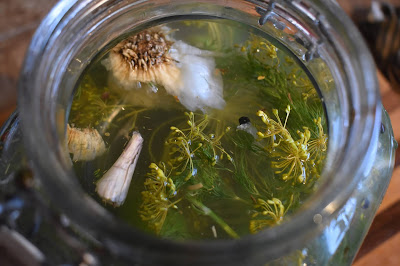 So that bring us to my offering for this month's event. Like Wendy, I opted to make a fermented pickle instead of a vinegar pickle. These are sometimes, I've discovered, called 'half-sours'; I have always called them lacto-fermented pickles, but they are popular delicatessen pickles that sit in a saltwater solution until they begin to ferment. After ten days these were still crisp and slightly sour. I think we're more of a 'full-sour' family though! So, we just left them a little bit longer and let them get nice and sour. 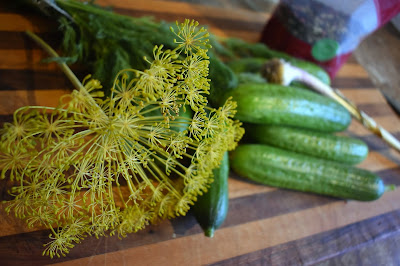 Place salt in the bottom of the jar. Pour in the filter water. Stir and swirl the jar until the salt is dissolved. Add the cucumbers and spices, leaving at least 2 inches of space at the top. You can keep the food submerged with a food safe weight or even a cabbage leaf.
Let sit in a cool, dark place for at least ten days or until it reaches your desired level of sourness, then refrigerate to halt the fermentation and store. The pickles will become more sour each day they ferment and the brine will turn cloudy.
Next month, the group will be watching Jaws with Amy from Amy's Cooking Adventures hosting. Stay tuned. I am pretty sure I watched that movie in the 80s...as a kid. I'll have to see if my library has a copy.