By Camilla M. Mann May 14, 2021
This is a sponsored post written by me on behalf of Chablis Wines in conjunction with the May 2021 Chablis #Winophiles event.
Complimentary wine was provided for this post though no other compensation was received. This page may contain affiliate links. Jill of L'Occasion is hosting the French Winophiles this month and we are turning our eyes towards the wines of Chablis. And Chablis Wines* graciously sponsored the event, sending sample to several members of our group. I will be sharing pairing for all of these soon. But I received my package at the final hour and only had time to explore one bottle so far. 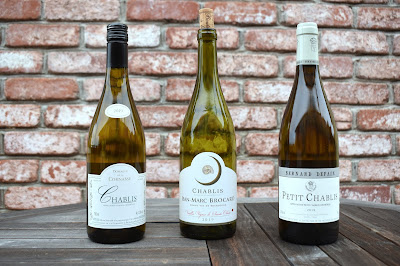 If you are reading this early enough, join in the live Twitter chat on Saturday, May 15th at 8am Pacific. Just follow the hashtags #Winophiles and #PureChablis. And be sure to add those to anything you tweet so we can see it.
Here's what the #Winophiles crew is sharing about all things Chablis...
Learning About Chablis 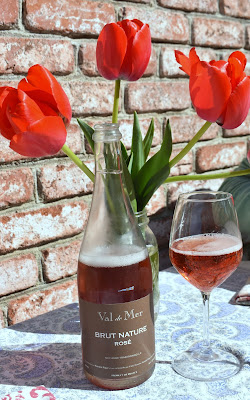 In preparation for the event, I had sourced a bottle of sparkling Rosé. You can learn about that bottle and pairing: An All-Day Sipper: Chablis Val de Mer Brut Nature Rosé + A Crêpe Tutorial. And you can read all about my misconceptions there as well. Then Jill told us she had a sponsor for the event and I was eager to explore more. I received the Brocard Sainte Claire Chablis Vieilles Vignes 2019; Domaine De La Cornasse La Chablis 2019; and Bernard Defaix Petit Chablis 2019. Then I started reading and researching. Turns out that Chablis is fascinating for a number of reasons. 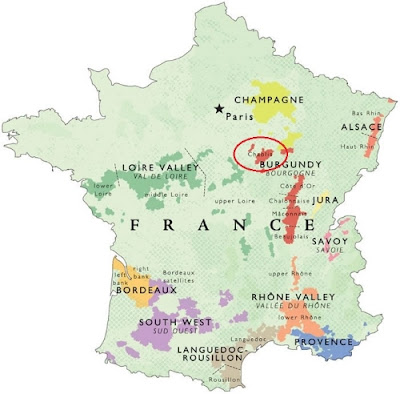 image from The Green Grape
Where In France
First, let's place it on the map. Chablis is the northernmost Appellation d’Origine Contrôlée (AOC) in Burgundy. It lies south of Champagne and east of the Loire Valley. It is renowned for producing a single varietal, dry white wine. It's all Chardonnay.
You can characterize Chablis as 'one grape, four appellations,' Petit Chablis, Chablis, Chablis Premier Cru, and Chablis Grand Cru. Of the samples I received, two were from Chablis and one was was Petit Chablis.
Dating Back to the Romans
The village of Chablis - and its vineyards - dates back to the Roman period, though Emperor Domitian removed all of the vines during his reign. Then Emperor Probus replanted them during his which was ended in 282 CE. So, 1800 years ago!
Kimmeridgean Soil
Years ago, in the Before Times (pre-COVID) - when we were able to attend big wine tasting events - I'll never forget meeting a winemaker whose vineyard is located in the Pinnacles area of Monterey County. I had seen him pouring wine for several people before me, chatting amiably and pouring generously. But when I reached the front of the line, he gestured to the side of the table. "Over here, Miss,"  he said. He reached under the table and pulled out a jar of soil. "Shake it up and take notes of what you see. Open the lid, close your eyes, and inhale. Then I'll pour you a glass of my wine."
That was the first time that I heard about terroir (yes, it was probably almost two decades ago)...and certainly the first time I realized just how distinctive terroir can be. At about the third wine he was sharing, I asked why he didn't educate all of the people who came to his table. "They are just here to get drunk. I can tell you want to learn," he motioned to my pen and paper and the notes I had scribbled furiously while listening to him describe the geologic grinding of the tectonic plates to produce decomposed granite soils with pockets of limestone from the decay of ancient marine organisms on what was once seabed. He told me that his soils were similar to Burgundy and responsible for the trademark wet stone aromas and flavors found in those wines and his own.
So, I have always loved reading about the soil of a vineyard when tasting wine. The subsoil in Chablis is called Kimmeridgean or Virgulien marl and dates back to the Upper Jurassic era about 150 million years ago. It has alternating  bands of gray marl, limestone, and sometimes fossils of Exogyra virgula, a small, comma-shaped oyster from the Middle and Upper Kimmeridgean.
Brocard Sainte Claire Chablis Vieilles Vignes 2019 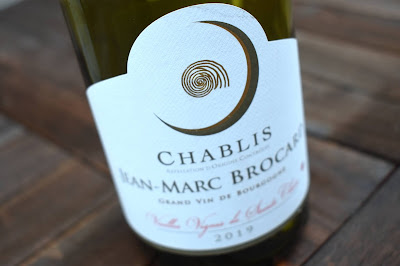 I am unashamed to admit that Jake and I picked which of the three wines to open based on the label. I had just been talking to him about the Exogyra virgula. And since it was on the label, that was the wine we opened!
Well, that's what I thought it was; it turns out that my presumption of what was on the label was incorrect. According to Brocard's website, it's an ammonite. They share: "Life force, the spiral is naturally present in nature symbol of creation and fulfillment, it characterizes our commitment to continuous improvement of our business approach." So, it's not the fossil I thought. But it is representative of their fervent commitment to a healthy ecology.
In 1973, Jean-Marc Brocard established his estate in Préhy, a small village near the town of Chablis. Jean-Marc now runs the nearly 200 hectare estate along with his son Julien. Over a third of those hectares are certified organic. 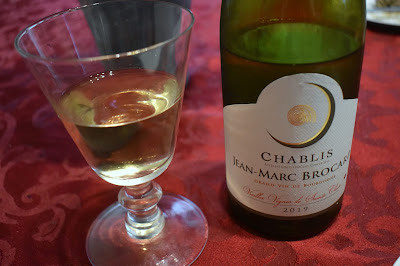 On the nose, the wine is rife with fruits and hint of the sea. On the palate, those saline notes are joined with more minerality and just a hint of citrus.
Gougères 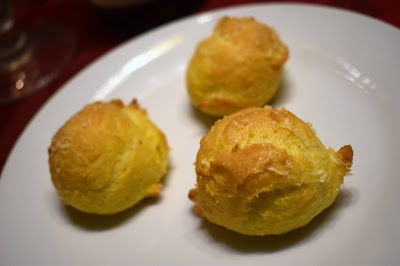 Since the Chablis wine region lies in the Burgundy region of France, I looked no further than the classic little savory cheese bites that begin most meals there: gougères. Gougères are really just cheese puffs, but they sound so much more fancy in French, right? The traditional cheese is Comté, but I used all of that for my failed first batch. So, I settled on Gruyère for this batch.

A quick note on that: I have made gougères tons of times. And  I thought it would be nice to use an actual French recipe. I kept thinking as I made it "Really, cream instead of water?" "Hmmm...that dough doesn't look right to me" and more. But I soldiered on with her recipe and ended up with hard, biscuit-like bites. They were delicious, but they were not gougères.
Ingredients makes approximately 30 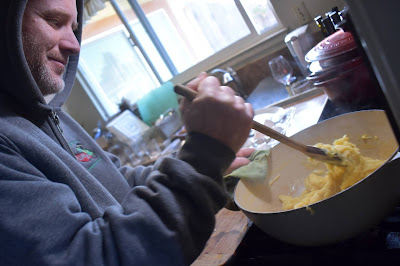 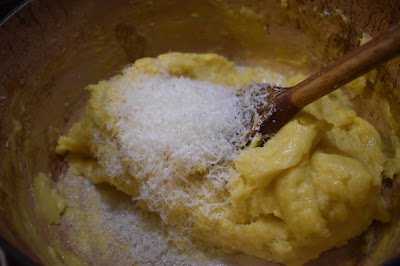 Preheat oven to 425 degrees Fahrenheit.
Bring butter and water to a boil in a large saucepan. Remove pan from heat and add flour all at once. Stir vigorously with a wooden spoon until mixture forms a thick dough and pulls away from sides of pan, approximately 3 minutes. Return pan to heat and cook, stirring constantly, until dough is lightly dried, about 2 minutes more.
Transfer dough to a bowl, and let cool for 5 minutes; using a wooden spoon, beat in 9 eggs, one at a time, making sure each egg is completely incorporated before adding the next. After the 8th egg addition, fold in the grated cheese. Add in the final egg and beat until the dough comes together; it will be thick, shiny, and smooth. 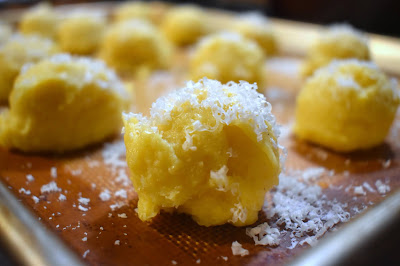 Scoop the dough onto a baking sheet. You can use two spoons or, as I did when I was in a rush for this second batch, I used a scoop. Place the balls at least 1-inch apart. Sprinkle more grated cheese over the top. 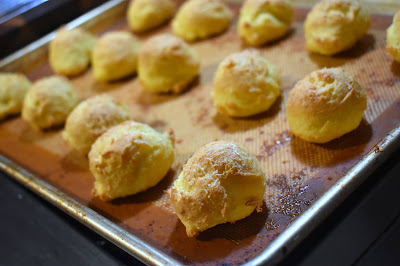 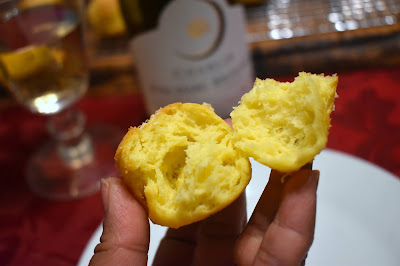 These were perfect. Eggy and cheesy. Just what I wanted with a crisp glass of Chablis. 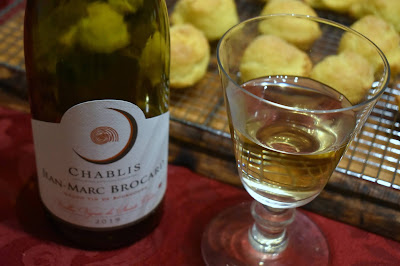 Well, that's a wrap on our May 2021 #Winophiles exploration of the wines of Chablis. I will be sharing recipes and tasting notes for those other two bottles I received from Chablis Wines. And the group will be back next month with posts about Maury with Lynn of Savor the Harvest leading the discussion. Stay tuned. 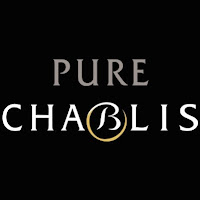