Connecting My Kids To Their Food: Meeting Pigs and Making Sausages #FoodieReads 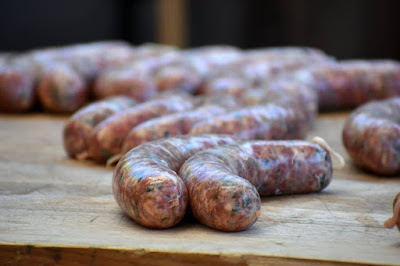 Somehow A Pig in Provence: Good Food and Simple Pleasures in the South of France by Georgeanne Brennan* ended up on my suggested Kindle reading list. It's not a mystery, really; the book is right up my alley - personal memoir, set in another country, and rife with food! And Amazon's algorithms are usually right on, disturbingly so. This 'buy-it-in-one-click' thing is truly dangerous! It's still less expensive than physical books...and until my library opens back up, this will suffice. However, I still prefer real paper and books that I can touch and smell.

I was not familiar with Georgeanne Brennan's work, but I was immediately drawn into her book as she begins describing her family's adventures of moving to Provence in the 1970s and starting a traditional fresh goat cheese business. A Pig in Provence is part travelogue and personal memoir. But it's really a love letter to Provence and all its foods. Brennan paints a delightful picture of the culture and the people of the region. Those "long meals, composed of simple, fresh seasonal foods and local wines, savored under the cooling shade of sycamore or mulberry trees in warm weather and in front of a cozy fire in cold weather, are the essence of the good life, well lived" (pg. 123).

Brennan writes, "I recognized that food was central to life, not for reasons of hedonism or sustenance, but because it was a link to everyone that had gone before me. It was a link to the land, a link to friends and family around a shared table, and a link to future generations to come. In a fragile, unstable world of change, food is a constant."

My family and I have been talking recently about connections over food. It's one of the things I miss the most as we go into our seventeenth week of being sheltered in place during this coronavirus pandemic: I miss having friends and family around my dinner table for a shared meal, libations, and seasonal food prepared with love.

That is a constant theme - shared meals - throughout her book. She writes, "Our social life, like everyone else’s, revolved around food. We lingered over lunches and dinners, went to the open markets where we met friends for an apéritif or coffee, took picnics to the beaches and lakes, and went to restaurants and community feasts. We steeped ourselves in the tastes of Provence—olive oil, wild herbs, fish, tomatoes, eggplants, zucchini, grilled lamb and sausages, fresh cheese, and fruit of every kind" (pg. 123).

As Brennan lives and eats through the seasons there, she details what she's eating and what she's learning. After she learns to identify and forage mushrooms around her house, she describes, "I carefully sliced our chanterelles into long, perfect sections and sautéed them in olive oil with a few shallots, salt, and pepper. As they cooked, they scented our little kitchen with an unfamiliar aroma, slightly musty and rich. When they became tender, I poured a half-dozen beaten eggs over them and sprinkled on parsley. I let the bottom of the eggs set, then flipped one half over the other, cooking the omelette until it was firm, but still soft in the middle. I quickly made a salad from greens I had picked earlier that day, and we sat down to our first home-cooked meal of gathered wild mushrooms"(pg. 70). 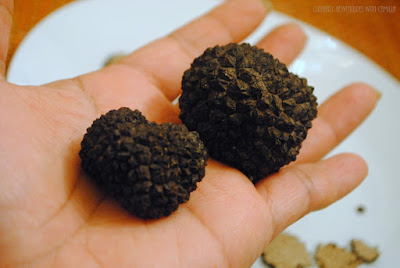 When she writes about truffled eggs, I began counting the weeks till the season and wondering if the world will open back up in time for me to head to my favorite Italian restaurant and purchase some truffles. "'You keep them and the truffles together in the jar. The smell of the truffles goes into the eggs. In two days, even three, break the eggs into a bowl, clean the truffles, and grate them into the eggs. Let stand a little, add some sea salt, and then cook the eggs in butter to make your oeufs brouillés. Ahhh.' He kissed the tip of his fingers with a smack. 'Sublime. Vous verrez'" (pg. 91)

On the other end of the culinary spectrum is a French-style ham sandwich. "Almost nothing tastes as good for lunch as a French-style ham sandwich with a cold beer. The bread, at least one-third of a crusty baguette from a late-morning bake, is cut lengthwise and heavily slathered with sweet butter before two or three slices of thin ham are folded in half down the center and the sandwich closed up. That’s it. Three tastes, three textures" (pg. 169).

At the end of it, I think the food philosophy embraced in Provence - well, in many places, but she is writing about Provence: "Any dish is only as good as the ingredients you begin with" (pg. 176).

But it was her recounting about le jour de cochon, when the people of Provence slaughter their pig that reminded me about why I have always strived to connect my kids to their food sources. I didn't want them to think that meat came on a styrofoam tray wrapped in plastic; meat was once an animal. And to that end, I have taken my kids to farms to meet their meat! 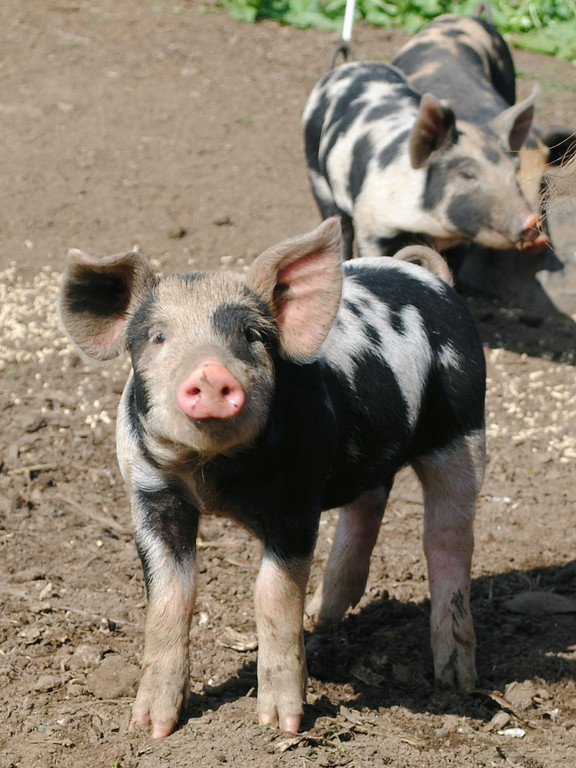 One year, several years ago, we went to visit our CSA (community-supported agriculture) farm. D spotted a sow with a row of piglets.

“Mommy, look! Babies!” he shrieked, gesturing at the pile of pigs huddled beneath the shade of the gnarled apple tree. The piglets shoved and squealed; they climbed on top of one another. All were trying to get to their mother’s teat. Those who were successful, suckled happily. Those who weren’t, kept jostling the heap. “I like that one,” he pointed excitedly. “He’s cute. Which one do you like?”

“No, silly Mommy. They’re for bacon… or ham!” he declared.

Brennan writes about this: "At one moment the pig was a living, breathing, heaving animal, one I had known for the last year as I helped Marie feed him, and in the next moment he was an inanimate object, ready to become food. With the release of blood, I saw his life slowly leaving and his eyes beginning to fade. My heart was pounding and I turned my head. When I looked back moments later, it was over and the transition from life to death completed. It was time to begin the transformation of the pig into pâté, sausages, and hams" (pg . 48). 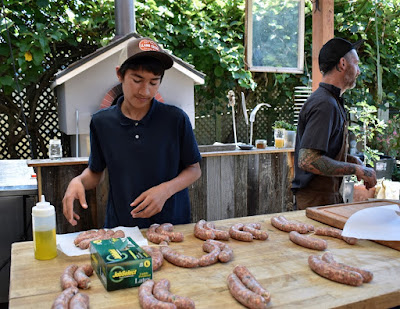 A couple of years ago, one of our favorite local chefs was opening up his restaurant for a sausage-making class. I scooped up two tickets immediately, thinking that it would be a great date afternoon for me and Jake. But as the event inched closer, a project deadline was looming for Jake and R, so I ended up taking my Enthusiastic Kitchen Elf with me instead. 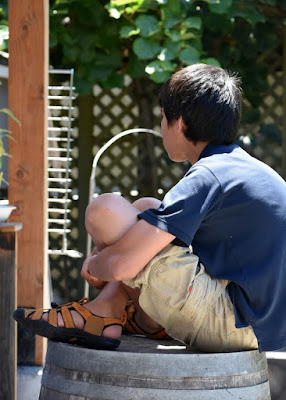 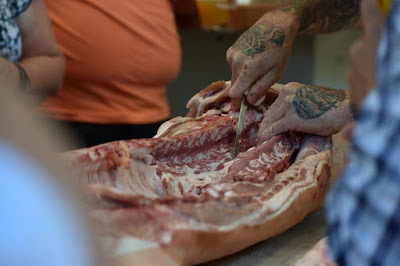 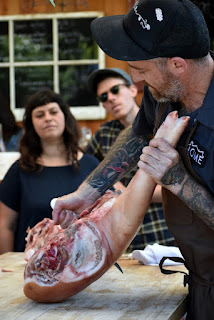 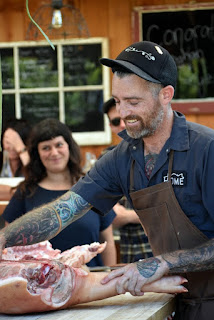 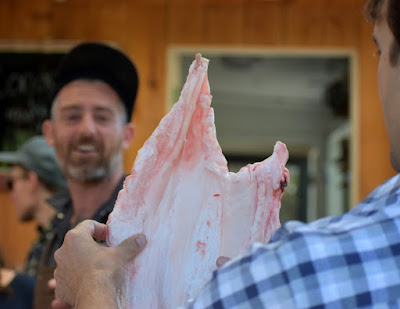 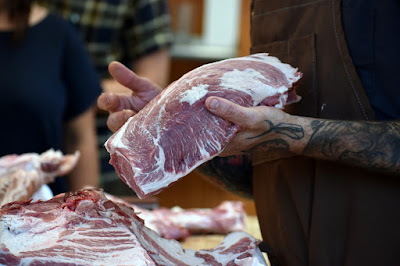 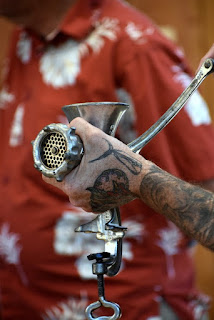 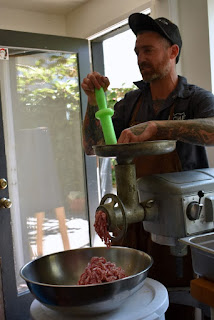 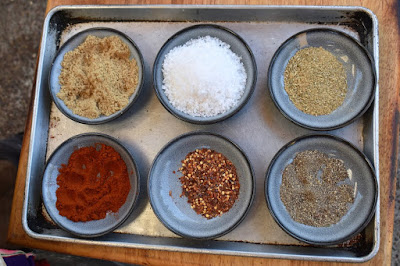 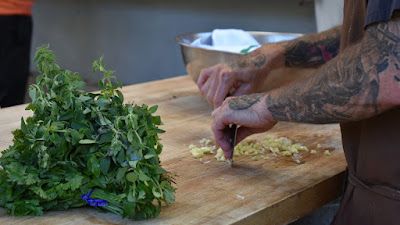 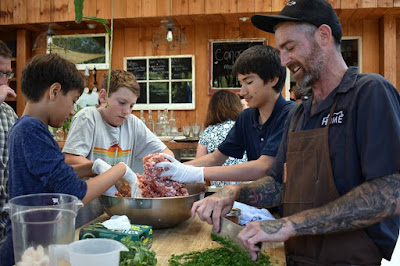 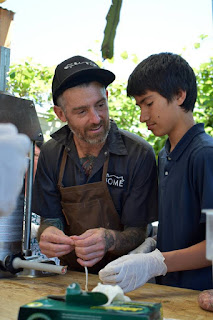 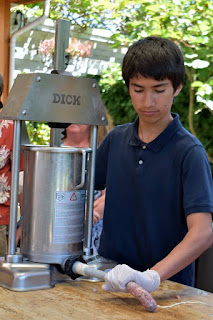 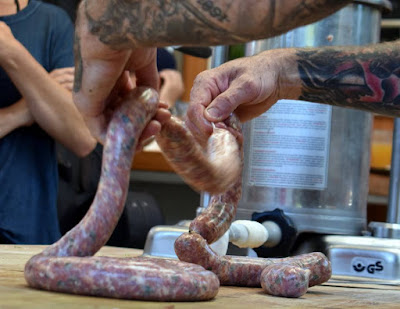 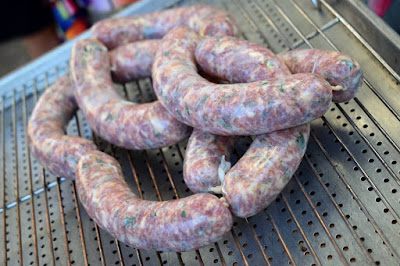 Everyone wrapped some and took sausages home. Chef Brad did roast some of the sausages in the wood-burning pizza oven for us to enjoy right then and there. 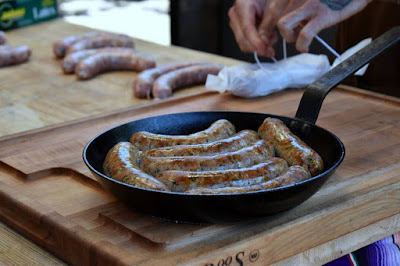 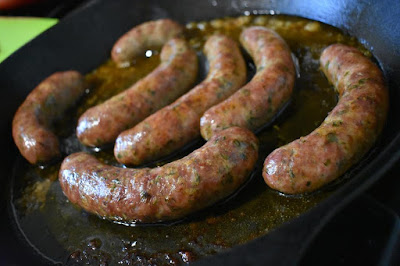 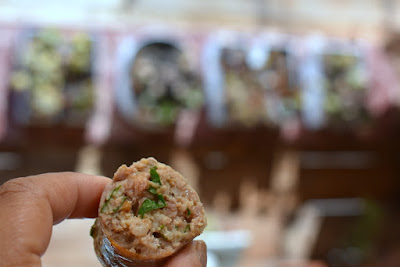