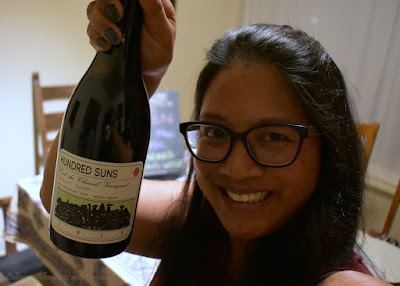 This month, the Wine Pairing Weekend group is, once again, celebrating Open the Bottle Night which was February 24th. You can read host David from Cooking Chat's invitation: here.


My Bottle
Open the Bottle Night has us pulling special bottles of wine out and uncorking! This is my fourth year of joining the fun. In 2015 I shared the La Marea 2012 Mourvèdre. In 2016, I uncorked Dracaena's Cabernet Franc. In 2017, I poured a 1994 Argyle Reserve Oregon Pinot Noir. 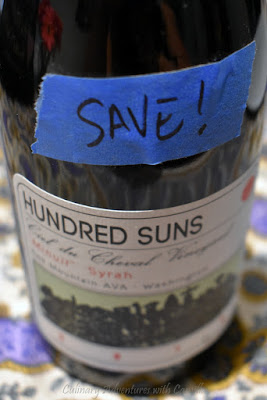 And, this year, I decided it was time to pull out the bottle that had 'SAVE!' on it: the 2015 Ciel du Cheval from Hundred Suns Wine. Last year, thanks to social media, I saw that a school mate Renée Saint-Amour, along with her husband Grant, is behind Hundred Suns Wine.

I immediately ordered two bottles of Pinot Noir, pouring one for our Easter feast and one for a girls' day. And, then, I ordered another three bottles: two Pinot Noir and one Syrah. I brought one bottle of Pinot to a birthday party, opened one for Mothers' Day, and - because she told me to wait for the Syrah - I squirreled away that bottle for a later date. This was that date. 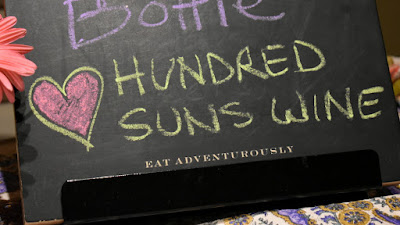 Because our schedules never aligned in our crazy, busy lives, we did an interview via email and I wanted to share their thoughts. I've long been loving their photos of amphorae! So, I started with that.

C: Those amphorae! What inspired that journey? How did it go? Thoughts on the wine? And when will it be available to everyone else!!?

Hundred Suns: The amphora project was inspired by wines Grant tried from Elisabetta Foradori, who used amphora on her Touraldagos which were deep and rich, complex and layered. Also from the white amphora aged wines which always seemed oxidative to Grant. This indicated to him that there might be more oxygen exchange with amphora. Why then, not make a bigger, denser wine and age it in amphora to try to develop the tannins and make the structural elements more supple and soft as well as building complexity that come from the amphora itself? In the end his hypothesis felt true. It definitely softened the Syrah you'll be drinking. That thing was a tannic monster when it came in the door, and watching it go from blood and iron, to fruit, fading in and out...it just went through so many stages as it aged. At the end we felt like the end result was something complex and much rounder and more supple than where it began. We are sold out of the Ciel du Cheval 2015, but you can still buy it on Vivino: here. 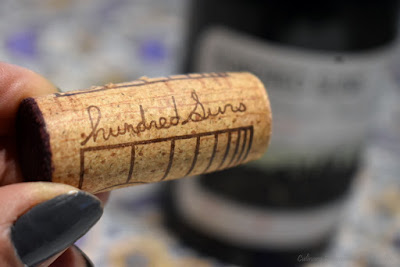 The newly released 2016 Klipsun Syrah is another 100% whole cluster wine aged in the amphora. This 2016 is a little more immediately approachable than the 2016, which I think is delicious now but I can also imagine being stellar in a few years.

C: About winemaking in general...How has the industry changed in the past few years? Any keen observations about the wine market?

Hundred Suns: Grant thinks there is a big shift in the industry away from winemakers trying to just please a single palate (or reviewer) and more interest in a return to experimentation. The natural wine movement has come charging in and in some ways it is almost polarizing.  He thinks there is a new interest in simpler techniques with less intervention. Things like organic and biodynamic farming have more cache with buyers and producers alike. I think we are in a very specific Oregon bubble of producers that are like-mindedly producing wines on small scales and with low interventions, but I also know that there is another movement in the opposite direction that revolves around machine harvesting and giant factory-like wineries cranking out thousands of cases a year.

A new crop of young, Millenial drinkers are growing into a powerful market force. I know on our end, everyone is trying to figure out how to bridge the gap between the tradition boomer consumer whose cellar is full but who appreciate and afford big dollar wines and the Millenials who are just getting interested. Research out there tells us that the American market is growing and that the average dollar amount people are willing to spend is growing; people are learning and trading up. That is good for us.

Here in Oregon, we are also seeing a really interesting phenomenon of some prominent wine houses getting bought up by large wine corporations, especially from France and California. We have some very close friends who have sold and cashed out it big ways to "the invasion." We came here to Oregon because Grant wanted to make Pinot Noir, but also because we knew that starting a bootstrap project in California is so expensive and difficult. We felt like here, we might be able to save for the little farm with a winery barn and some plantable acreage. I'm afraid those days are starting to feel over. Without investors, folks like us can't compete with cash buyers with deep pockets, so although this area has in the past been a hot bed for small producers, we may see that become harder.

C: Are there any challenges? Any triumphs you care to share?

Hundred Suns: We had some real challenges this year in the 2017 vintage. We had to make some decisions that sent us pouring some wine down the drain, which is really hard when fruit is so expensive as are the resources that are required to make it into wine. Grant will always want to be as non-interventionalist as possible. Everything is done with native yeast and as little sulfur as possible He doesn't use any kind of additives or nutrients in the wines he makes. This means you have to be hyper vigilant about the process you use because you can't depend on those elements to clean things up for you on the back end. Sometimes, just because of the microbial stew in the winery, conditions of the fruit, etc, you have ferments that don't go how you want. We had a ferment this harvest that just went off the rails in the weirdest way, and when we tasted through the wine before it went to barrel, we just knew it wasn't going to be good enough for us to put our name on. So we had to let it go.

In 2016, we had a couple of ferments that we thought were a little off, but we barrel aged them and when we put them into the Eight Cut Blend, they are the barrels that made the entire thing sing. They added complexity and layer to the mix. Making those calls is hard, and the wines are living, breathing things that obviously change long after you put them in the bottle. There will always be an element to winemaking which is ...letting go.

I think our biggest triumph with Hundred Suns is that it is a dream we've had for a long time, and we are making it a reality every day. Building something special with your partner is a lovely process. The danger is that since Grant's work at Flaneur is so all-consuming, most of our conversations take place from 9 pm -12 am after kids are asleep. Still, the wines feel weirdly like an extension of our family in a way.

My last question was about the Ciel du Cheval 2015 specifically. 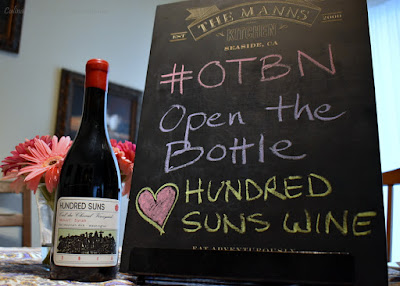 C: With what should I pair it? Do you have a favorite pairing?

Done! But first a few comments about the wine. And one quick note (and shameless plug): their 2016 wines released to their mailing list last month and sales open to the public on March 14th. Don't miss out! I am looking forward to the 2016 Klipsun Vineyard Syrah, 2016 Bednarik Vineyard Pinot Noir, and 2016 Old Eight Cut Pinot Noir that I have coming. Stay tuned for notes on those...or I might stick 'SAVE!' on one of them and you'll see it for next year's #OTBN. 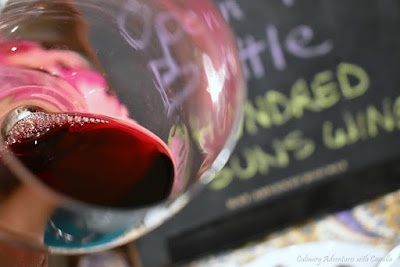 You can read how I likened their wines to bottled poetry, to quote Robert Louis Stevenson. This wine is more Arabian Nights and the alluring Scheherazade. Think exotic, smoldering, and seductive. And, like Scheherazade, you want more. It starts with subtle floral notes that open to a rich espresso or chocolate as you sip. The wine is supple, complex, and lovely.

When Grant suggested brisket, I immediately thought about messy, glorious barbecue sandwiches. Who doesn't love brisket sandwiches?! But it didn't seem right to overwhelm the wine with an overbearing barbecue sauce. 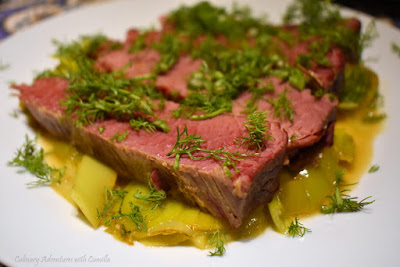 So, I opted for a more elegant dish of brisket over leeks braised in butter topped with some fresh fennel fronds. I also served steamed sorghum, roasted purple Brussels sprouts, harissa-kissed roasted carrots, and a winter citrus-kale salad for our #OTBN feast. 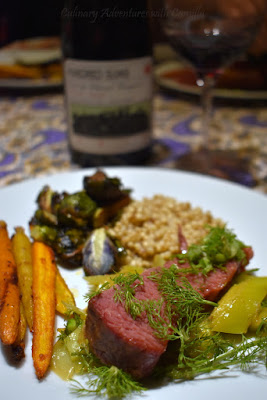 Procedure
Leeks
Lay the coins in a shallow dish and cover them with cold water. Rub the leeks to remove any dirt and grit. Rinse and set aside.

In a heavy skillet, melt butter in olive oil over moderate heat. Add leeks to the skillet and cook, stirring occasionally, for 5 to 6 minutes. Pour in the broth and bring to a simmer. Cover and braise until the liquid is absorbed and the leeks are silky soft, approximately 10 to 12 minutes. Season to taste with salt and pepper.

Brisket
In a Dutch oven, heat olive oil. Brown the brisket on all sides, approximately 3 to 4 minutes per side. Remove to a plate and set aside.

In the same pot, add in your onions and cook until they soften and begin to turn translucent. Add in the ginger, turmeric, cumin coriander, cardamom, and cloves. Stir to combine. Lay the brisket on top of the onions and pour in the beef stock and red wine. Add in the cinnamon sticks.

Bring liquid to a boil, then cover and reduce heat to a simmer. Braise for 3-1/2 to 4 hours. Remove meat from the liquid and let rest for 5 to 10 minutes before slicing. If you want to create a sauce or gravy, bring the cooking liquid to a boil and cook until reduced by half. I opted not to do that as I wanted didn't want to drown the flavors of the brisket in a rich sauce.

Serving
Slice the brisket into desired thickness. Place a portion of the leeks on individual serving plates. Top with the meat and sprinkle with fennel fronds. Serve immediately. 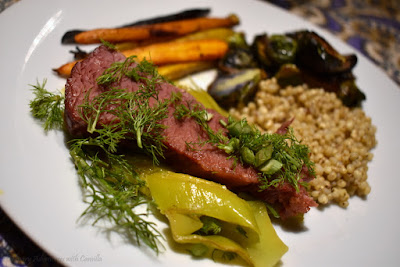 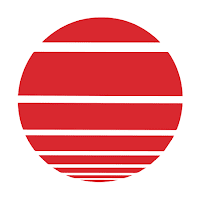 You may find Hundred Suns Wine on the web, on Facebook, and on Instagram.
Posted by Camilla M. Mann at 9:05 PM