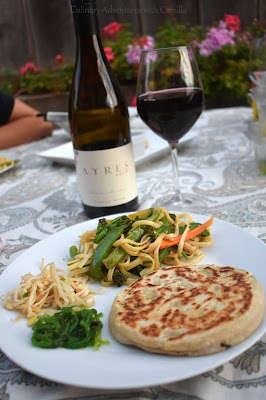 I have been making green onion pancakes for years. But I've decided to share a recent riff because it's now a family favorite; I added furikake and it is delicious! Furikake is a Japanese seasoning made up of toasted sesame seeds and bits of dried seaweed; and I always have a canister or two of it in my spice cabinet.
Ingredients makes 4 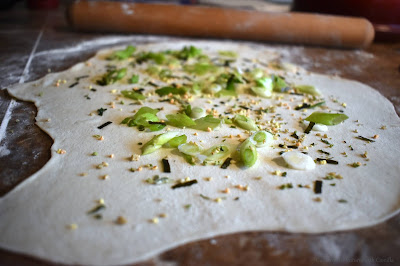 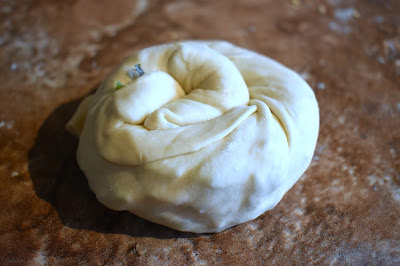 Place flour in large mixing bowl and slowly add in the hot water until it just comes together. Transfer to a floured work surface and knead a few times to form a smooth ball. Place in a bowl, cover with a damp towel, and allow to rest for 30 minutes at room temperature.
Divide dough into four even pieces and roll each into a smooth ball. Working one ball at a time, roll out into, roughly, an 8-inch disk. Paint a very thin layer of sesame oil over the top and roll into a jelly roll; twist roll into a tight spiral, tucking the end underneath; flatten gently, then re-roll into an 8-inch disk.
This time, paint with another layer of sesame oil and sprinkle with 1/4 cup scallions and furikake. Roll up like a jelly roll again.
Twist into a spiral, flatten gently, and re-roll into a disk. Repeat with remaining pancakes.
To cook, heat a splash of sesame oil in a large flat-bottomed pan over medium-high heat until shimmering and carefully slide the pancake into the hot oil. Cook until the first side is an even, golden brown, approximately 2 minutes. Flip carefully with a spatula taking care not to splash the oil and continue to cook, shaking pan gently, until second side is an even, golden brown, approximately 2 minutes longer. Drain on a paper towel-lined plate. 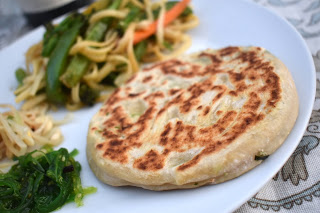